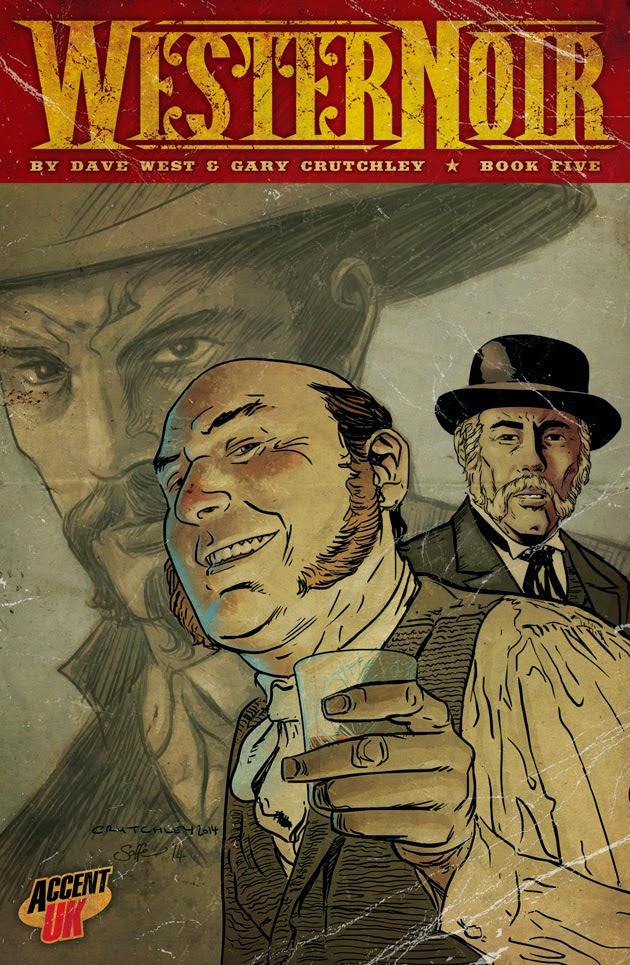 
The Covenant of Sebastian Caligary.

Jump in to the WesterNoir world as the story takes a darker turn and the machinations of the plot are revealed but what will it mean for our intrepid anti-hero?


The first four installments of Accent UK's supernatural western series WesterNoir have shown a great tale slowly and subtly coming together like a jigsaw in front of our very eyes with the various adventures of the anti-hero Josiah Black but they left me wanting to see a little bit more of the characters behind the scenes that were pulling the strings so to speak.  Well, in this issue, that is exactly what we get.

With the first four issues focusing on the character of Josiah Black himself, West and Crutchley have used this issue to step away from that and show some of the characters that have been both involved in Black's life as well as reveal how they have been manipulating it as well.  That rather brave move could have stopped the story dead in it's tracks but that's not the case here, instead it brings a new layer to the series and even put some faces to the names as well.  That adds a great sense of dread and menace to proceedings as well as an almost conspiracy style twist to the story.

One of the things I liked the most about this addition to the series was the pacing.  It took a slow and deliberate road to the end of the issue and that made the final couple of pages really come alive and make you wish you had the next installment in front of you right then and there.  That is definitely one of Dave West's biggest strengths and it always seems to shine the brightest on this series.

As always the art duties are handled by Gary Crutchley and once again, his stark and eye catching work really brings this story to life.  With this installment having a much slower pace than the others, I was worried that his almost gothic and menacing would be a little lost but that's not the case here at all.  Instead, it absolutely flourishes and, as the saying goes, the devil is in the details and that is true of Crutchley's artwork for this issue.  The facial expressions and the settings really add as if they are characters themselves and that has always been one of the main selling points for the series.

The cover is again drawn by the team of Crutchley and their talented cover artist Matt Soffe.  They always seem to give the covers for this series a real, almost classic western feel without falling to some of the cliches that sometimes plague the genre itself.

All in all, WesterNoir is one of those series' that just gets better with each issue and with the story itself deepening here, I can't wait for book six and neither should you.