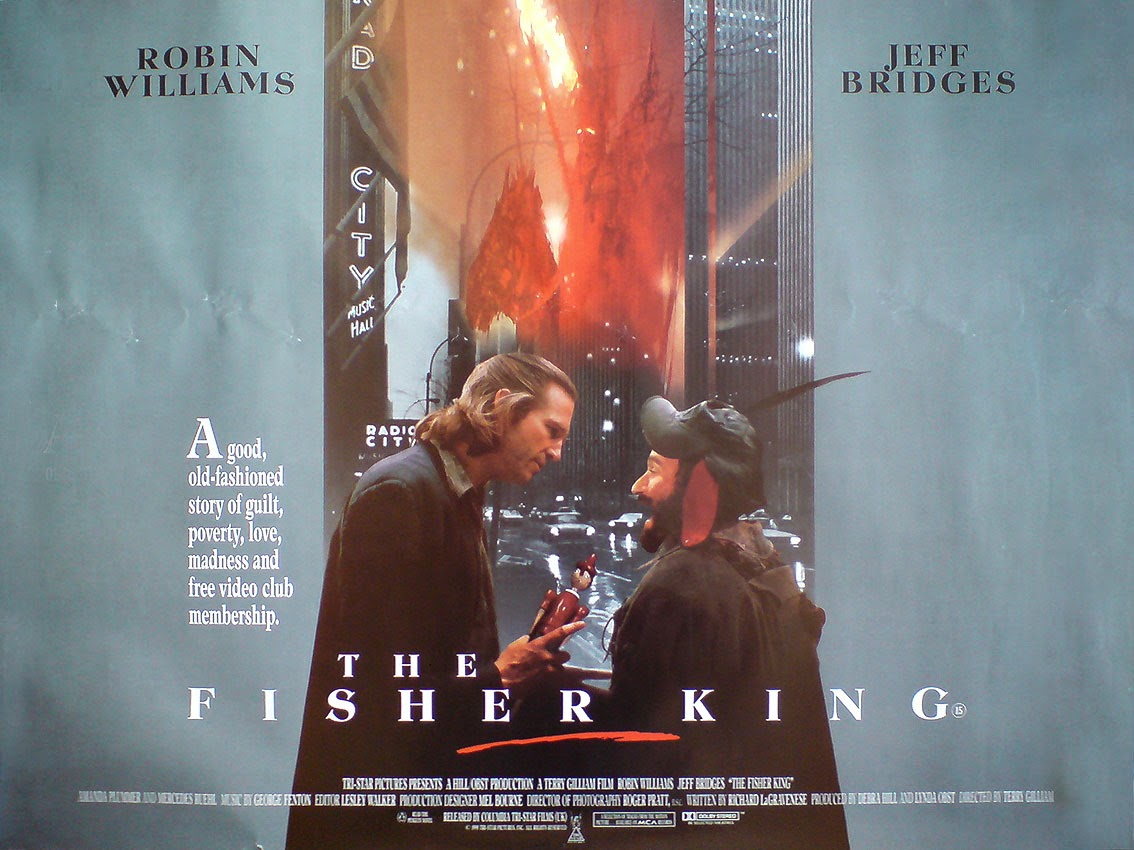 After hearing a popular DJ rail against yuppies, a madman carries out a massacre in a popular New York bar. Dejected and remorseful, the DJ strikes up a friendship with Parry, a former professor who became unhinged and then homeless after witnessing his wife's violent death in the bar shooting.

The DJ seeks redemption by helping Parry in his quest to recover an item that he believes is the Holy Grail and to win the heart of the woman he loves.


Sometimes a movie will stay with you to such an extent that even if you haven't seen it for months or even years, scenes from it will still appear in your mind.  The Fisher King is one of those rare movies.

It had been a long time since I had watched the movie yet I kept imagining what would have become of the characters involved in such a tragic story.  Where would they be now?  What would Jack and Parry be up to?  That kind of thing.  That's when I decided to watch it again for the first time in a very long time.  Would it match up to the memories that I have of watching the movie or would it be a case of remembering something as being better than it really was?

The simple answer is yes but that would be doing it a massive injustice to leave it there.  This is one of those movies that not only reaches those expectations but smashes them in to pieces.

The Fisher King is a movie that manages to make you laugh, make you cry at the tragedy of the story yet ends up making you feel refreshed, hopeful and even completely in love with the characters.  A lot of that is down to the superb writing.  The pacing is near perfect and not only hooks you in but it flows so well that the movie is over so quickly that you don't even notice the over two hours run time.  I would even go so far as to say that this is the most perfect script that I have seen for a movie because it just seems to be effortless in it's storytelling.

With such strong writing, you will need performances that are utterly spot on with their portrayals of the characters and this movie has that in spades.  Jeff Bridges and Robin Williams completely and utterly inhabit their characters to such a degree that they come across as real and you forget that it is two actors playing a part in a movie.  I felt so involved in their lives that you almost felt each and every heartbreak that happened to them.  The supporting cast more than hold up their end of the bargain, especially in the shape of Mercedes Ruehl and Amanda Plummer.  Their characters almost feel like the ying to the Bridges and Williams' yang.

I don't often say it but sometimes a movie comes along that is so beguiling and involving that it can be classed as essential viewing.  The Fisher King is one of those films and they don't come along very often.