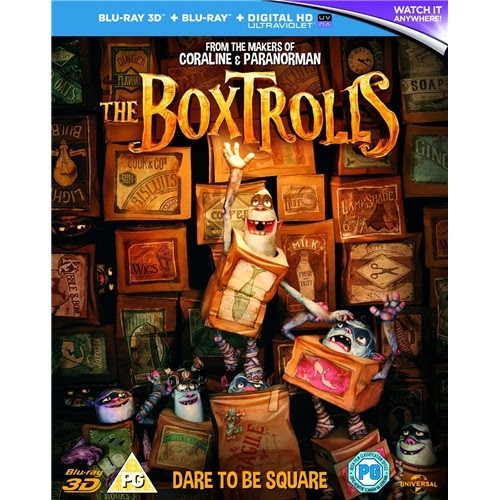 Based on 'Here Be Monsters' By
Alan Snow


The third feature length film from the awardwinning and uniquely creative Laika studios.

The Boxtrolls is a highly original fun for all the family adventure featuring the adorably mischievous Boxtrolls. Cute timid subterranean creatures that find ingenious uses for the refuse of the human inhabitants of the town of Cheesebridge.

But The Boxtrolls are disappearing each day as the dreaded Red Hat exterminators hunt them down and only a young human boy called Eggs can rally them to find their inner hero and stack together to save the day.


When made by the studio behind Coraline and ParaNorman, there is a certain expectation for the viewers that the movie is going to look unique, have an involving story and a certain dark humour running through the movie.

With The Boxtrolls coming on to the scene, the trailer looked absolutely gorgeous and the story seemed to have a real Neil Gaiman style feel to it so I couldn't wait to get my hands on it but would it live up to the expectations?

One of the things that struck me straight away was just how beautiful the animation was.  The action on the screen is utterly beguiling and stunning.  Even on the darker moments in the movie, the animation not only brings the characters to life but makes them literally jump off of the screen.  That works really well with the story as well.

Story wise, the movie comes across as a mix of Roald Dahl and Neil Gaiman yet at the same time feels utterly unique in it's approach to tackling the heavy duty themes of prejudice and persecution but in a way that everyone in the family will understand without it being too preachy or even too heavy handed.  It's great to see a movie that is aimed at the family of viewers but doesn't just rely on bombastic direction and pretty things to keep the attention.  This movie had a mesage and did a great job of putting that across.

I have to admit that the varied cast for this movie worked really well with their respective characters and really gave them substance.  That's the most true for the Boxtrolls themselves and their relationship with the young boy named Eggs.  While the story was very well written, if the performances hadn't have been up to the task then the emotional edge would have been lost in translation so to speak.  That is definitely not the case here.  Considering that the Boxtrolls speak in their own language, the fact that the performers were so able to put forward their separate personalities is a testament to their skill.

The special features here are brilliantly interesting and really go indepth into the making of the movie itself as well as the influences of the people involved.  That's most true of the commentary by the directors.

All in all, The Boxtrolls is definitely a movie that deserves to be seen by more people.  With a good message that is performed by a very talented cast, this movie really leaps off of the screen in such a way that you can't help but be drawn in to their world.  Mixing that message with humour, a bit of danger and excitement, this is a movie that will be enjoyed by the whole family for a long time to come.

Posted by Pat Scattergood at 11:39