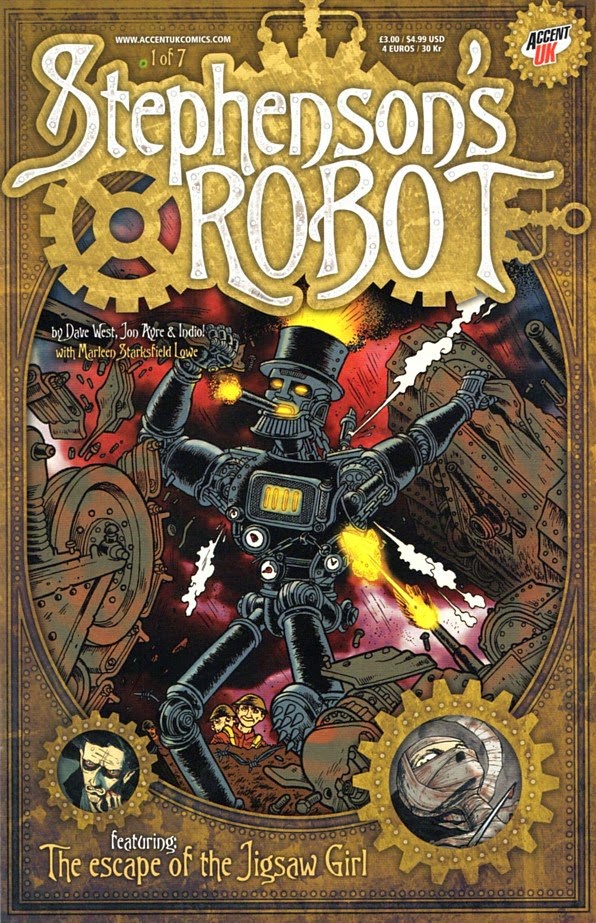 
Stephenson's Robot is a new mini series from Accent UK that takes an alternate look at reality in which the inventor Robert Stevenson creates a mechanical man to be released in to the battlefields of World War 1 in the hopes that it will end the war sooner.

However, the mechanical man named Kingdom, joins up with a traveling group of circus performers, each with their own story to tell, to march towards a battle that simply must be won as foretold by the Jigsaw Girl!


When I read the idea behind this title, I have to admit that I was massively intrigued.  Accent UK are known for taking risks with their stories and for never going to simple route so to know that they were going to tackle the alternate history genre with lashings of steam punk was an interesting idea for me.

With some great titles behind them, there was a hell of a lot of expectation from me for this title and not only did it live up to those expectations but it surpassed them them easily.

The characters all have their own pasts and their own motives for being involved in the main story line and I loved that.  Each character feels like they are part of a jigsaw, no pun intended, and are each a massively important part of the story.

Talking of the story, I loved the simple fact that they didn't do the simple a to b route.  Instead we have three separate stories that are all unique in their execution yet they add up to all being part of a much larger tale.

The first story is the one set in the first World War and does a brilliant job of introducing the robot and his merry band of circus folk to the reader.  The story really starts this series off with a bang and that's exactly what a title like this needs.  There are a lot of themes and back story elements that are hinted at that have left me really wanting to see more of them.  The art for this story by Indigo really does bring the characters to life in a big way.  I'm not sure if it was intentional but there was a bit of a very dark comedic edge to the art when the gore does come yet I thikn that worked perfectly.

The second story is a massive departure from the first but it really seems to have a really intriguing slant to it.  Set on Mars in the future, it gives hints at a mechanical race that appear to be descended from the original robot.  I would love to see where this one is going.  Indigo's art looks so different to the first story that I had to double check that it was the same person but it works so well that you can't help but notice all the little details that Indigo has put in.

However it's the third story, The Escape of the Jigsaw Girl that is by far my favourite of the three.  There's a tragic almost supernatural feel to the story and West really packs a whole lot of story in to a relatively short page count.  A lot of that is due to the superb pacing but it also teams up with the art by Marleen Starksfield Lowe to such an extent that it felt like the perfect pairing.  The moody and almost gothic art really adds another layer to this interesting tale.

All in all, Accent UK's releases just don't seem to be able to do anything wrong.  This is definite prood of that and is by far one of their best.  The three vastly different stories team up so effectively that it doesn't feel at all disjointed or messy.  This is one of the most interesting things that I have read in a very long time and I can't wait to see where the team are going to go next.