Of Bone and Thunder Review 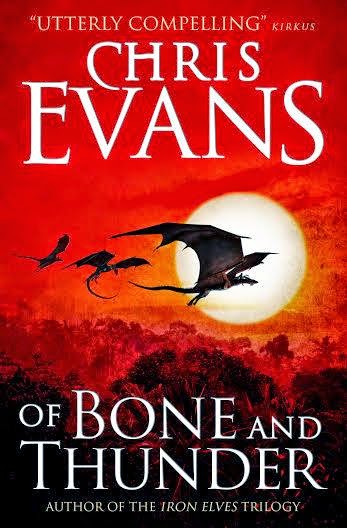 
A land of thick jungle and mist-swirled mountains.  An enemy moving unseen beneath the lush canopy.  The growing threat of thaumics - a magic wielded by few that threatens to destabilise all.  The youth of a kingdom sent to fight in a faraway hell while back home, discord and disillusionment reign...

Chris Evans takes a daring new approach to the traditional world of sword and sorcery by thrusting it into a maelstrom of racial animus, drug use, rebellion, and a growing war that seems at once unwinnable and with no end in sight.  In this thrilling epic, channelling the cultural upheaval and wholesale destruction of the Vietnam War, right and wrong, country and honour, freedom and sacrifice are all put to the ultimate test in the heart of a dark, bloody, otherworldly jungle.


I have to admit that I wasn't familiar with the work of Chris Evans' work in the slightest.  All I knew about him was the simple fact that he is best known for his fantasy novel work so when I saw a blurb that said the story was a mix between a Vietnam War story and a Lord of the Rings style fantasy adventure.  Would the combination of the two mix well or merely be a disjointed mess of a novel?

The idea of mixing two wildly different genres and seeing what comes out at the end really interested me.  In fact, Chris Evans has done a good job of combining the two in a well written and well thought out theme.

The first couple of chapters are a masterclass of how to hook a reader in and keep them in to seeing where the story was going to be taken next.  In fact, I would say that those first couple of chapters were the reason that I dove straight in to the story itself.  With the story having such a top notch start, Evans was going to have to pull something special out of his hat in order to keep the quality flowing through the novel and for the most part he succeeds.

With a lot of the scenes obviously taking part in a jungle, the scenes set there had to be completely on point but for some reason, they felt like the weakest part of the story itself.  It's not to say that they were bad, because they weren't, it's just that the rest of the book was so good that these parts just kind of fell off a little.  That's a real shame because there were some good ideas there, it was just the execution of it all.  A lot of the problem was the need to detail absolutely everything during these parts where leaving some of it to the readers imagination would have worked a lot better.

The other two parts that make up the rest of the tale work superbly well.  Jawn's story of feeling like it is his duty to volunteer for one tour of duty is handled extremely well.  I was a little worried that that part of the story line would come across as cliched but you can't help but feel really involved in his story and almost emotionally connected to the character himself.

Finally the third part is the story of Breeze, a wizard like Jawn, who tries to change the course of the conflict with magic.  This was by far my favourite part of the book.  It's true that the character development of the characters kind of felt a little lacking in places but the rest of the writing is so strong that you still find yourself feeling linked to the main characters and what is going to happen to them during the war.

All in all, this is a very well written, well thought out book that really does mix the theme of combining the Vietnam War and a magical fantasy feel.  I really wanted to know a little bit more about the characters but for the most part, this is a unique and interesting take on the genre.  Definitely worth picking up.