Cutie and the Boxer Review 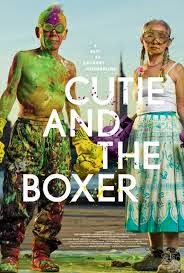 Written and Directed By
Zachary Heinzerling

Anxious to shed her role as her overbearing husband's assistant, Noriko finds an identity of her own.


As an art fan married to someone studying graphic design and illustration, this documentary really interested me when we saw the synopsis for it.  I must admit that I hadn't heard of either artist before watching it but now that I have seen their work and this superb piece of work, I'll definitely check out more.

The thing that struck me the most about the documentary is the simple fact that this is one hell of a lot honest story, at times brutally so.  No stone is left uncovered here.  We're shown the affects of the alcoholism that Ushio suffered from during his career and even how history was perhaps repeating itself in the shape of his son Alex.  We're shown the pair both working on their own styles and they couldn't be more different than night and day but the thing that underpins both of them is the fact that there is not only a slight touch of jealousy but also one of resentment in places.

Ushio was and still is a well regarded but sadly under appreciated artist in New York.  Known for his 'out there' styles of work, one of which includes strapping paint covered sponges on to some boxing gloves and then beating the hell out of a canvas.  He is the epitome of a bohemian artist.  He lives and breathes his art so much so that he loses himself completely in what he is doing to the point where he doesn't realise the damage that his past has caused his family and friends.

His wife is shown as someone that not only supports her husband but one that has done so to the detriment of her career.  There are times where there are moments where she appears to resent that and sometimes even show some moments of jealousy towards Ushio getting the attention for his work despire her being just as much of an accomplished artist as he is.

The other thing that struck me the most emotionally is that you can literally see Noriko grow and blossom in front of your very eyes as you watch their lives unfold.  There is a great moment, and a subtle one at that, where they show people looking at her work and the look on her face just says it all.  You can literally see the pride and happiness return in front of you.  A beautiful moment and one of my favorites of the whole documentary.

There are so many reasons to recommend this documentary.  Firstly, you have some fantastic moments where you can see some utterly beautiful art created by both Ushio and Noriko.  You get to see every moment of the creative process and just what it takes out of them both.  The fact that they work in such different ways really shows a pair of artists at work and seeing the difference in Ushio's frantic and hectic style to Noriko's calm and collected style is a thing of beauty.

As well as that, you see a story that not only shows a complete and brutally honest account of their lives but in amongst all the things that they both regret there is a real feeling of love and hope there.  You see them both grow as people and finally start to get the recognition that they deserve as well.

All in all, I have to admit that this is one of the most touching and beautiful documentaries that I have seen for a very long time.  Well worth picking up, especially if you are a fan of art and even if you're not.

Posted by Pat Scattergood at 11:05