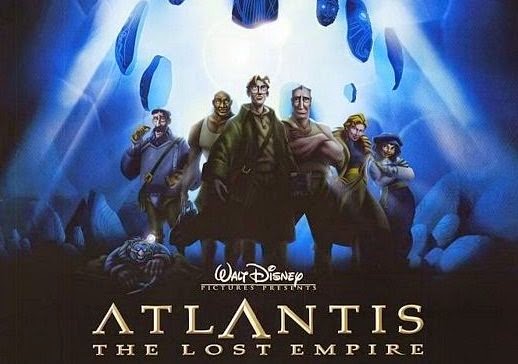 
This action-filled, deep-sea animated adventure, follows the inexperienced young explorer Milo James Thatch who is desperate to complete the quest begun by his late grandfather in finding Atlantis. Thatch tries to convince his friends that he knows the whereabouts of Atlantis without success until eccentric billionaire, 'Preston B Whitmore' agrees to fund an expedition to find the legendary lost empire.

As the linguistics expert, Milo, guides the team, headed by Commander Rourke, to the elusive undersea kingdom of Atlantis. But what they find there defies their expectations and triggers an explosive series of events that only Milo can resolve.


I've always wondered why out of all the movies that Disney have put out over the years, Atlantis: The Lost Empire has been largely forgotten.  I figured I would look through some of the reviews and see if there seemed to be a reason for it and  to be honest, there didn't so I thought I'd put it in and give it a shot.

Now that I have seen Atlantis: The Lost Empire I have to admit that I was massively entertained and really enjoyed it.

The story itself has quite a few influences that move the story along with some great work on the pacing front.  The characters are, for the most part, given a chance to grow as the movie goes on and htere are some really impressive set pieces here too.

There is a big steam punk element to the story alonside some great subtle and not so subtle nods to the 1950's movies where they go to unexplored places and find all manners of people and creatures.  That's the road that this movie follows yet does so with a sense of fun and excitement running throughout.

The animation isn't Disney's best and I will readily admit that but there are some absolutely gorgeous looking scenes in this movie.  There were times in fact where you were so hooked in to the visuals that you could feel yourself lost in the story.  I love it when a movie has that kind of effect on a viewer.

That said, there were some moments that fell in to the side of melodramatic cliche for me and that took me a little out of the movie.  Don't get me wrong, it wasn't enough to ruin the story or to bring it to a halt.  It give off more of a "why did they do that for?" feeling.

Cast wise, this one is wildly eclectic thanks to featuring such people as James Garner, Michael J. Fox and Claudia Christian.  Hell, they even cast Jim Varney, yes the man of Ernest fame, in what was to sadly be his last movie before his death.  They all do a great job of making the characters all seem different personality wise and Garner seemed to be absolutely loving playing his part.

All in all, I don't really know why this one is one of Disney's forgotten movies.  It may not be the most original movie I've ever seen but the execution of it was well thought out, paced well and had some great set pieces that really stay with you, even after the end of the movie.  Definitely one to check out if you get a chance.

Posted by Pat Scattergood at 08:50