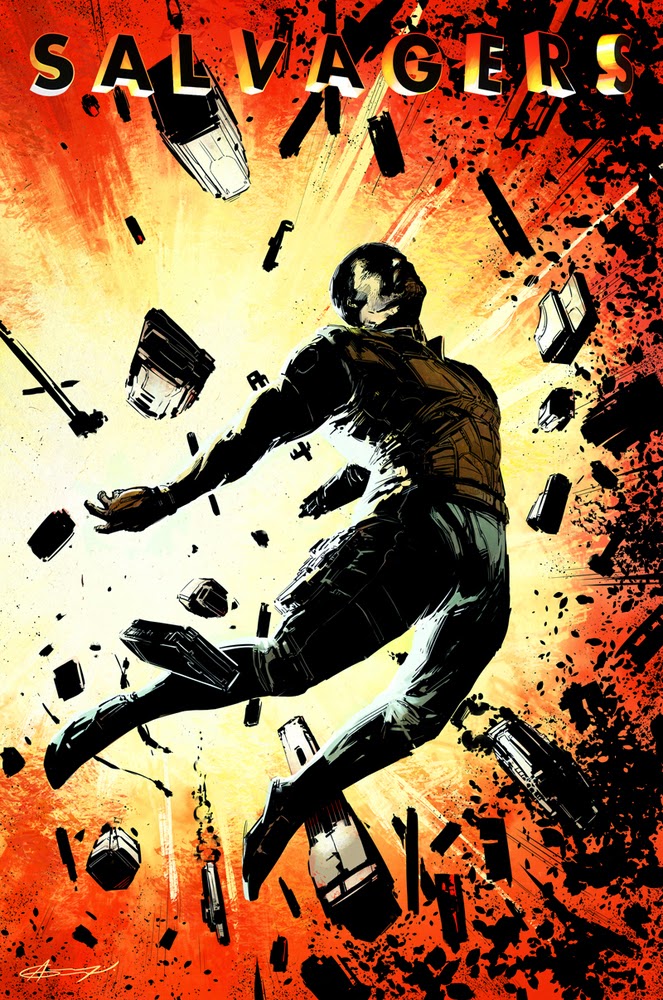 
As we move forward, our band of salvagers have found themselves stranded on a Darzinean Warspray, deep in the Outer Rim. The mystery of the deadly security company known as Blackbane is unfolding and danger is around every corner of this "wreck" they have been commissioned to salvage.

Brigby has fallen into debt with some unsavory characters causing tension between crew members and someone will have to race time to avoiding impending doom.


With the superb first two issues, I couldn't wait to jump back on board for the third installment of Salvagers by Bob Salley and his extremely talented team.

Here we pick up straight where issue two left off.  The feeling of panic and dread that ran through the second issue is definitely here as well and if anything, Salley has ramped up the atmosphere to another notch.

The action here is fast paced and really has a great way of hooking the reader in to caring about whether or not the characters are going to survive.  Considering the fact that this is only the third issue and Salley has taken a quite subtle approach to revealing some of the charcters past and their relationships, the writing really does get you to care about the crew.  In this, the third issue, more is revealed about how they work together, their past and more and it really raises the quality of the story.

I thought that the art in the first two issues was superb and really looked like it could be a science fiction movie on the big screen.  Here, the art has really exploded in a good way.  I don't know what has changed, considering it's the same creative team as the other issues, but it felt darker and grittier.  That really works on the final third of the comic where the action really flies off of the page.  In fact, I really liked the final panel because it had that sort of impact that makes you want to grab the next issue as soon as possible.

If you haven't picked up this series then why not?  This third issue just shows a series that is improving with each installment so jump on board for a science fiction tale with great characters, great pacing and some brilliant art work, you won't be disappointment.