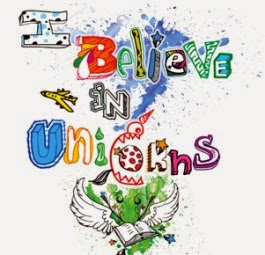 Based On
I Believe in Unicorns by Michael Morpurgo

Danyah Miller as The Unicorn Lady

I Believe in Unicorns is set in a library full of books, that hold more than stories within their pages.

It is a tale of the power of books to change lives, and the bravery of a boy called Tomas.

Tomas loves playing in the mountains where he lives, and he hates reading and school; but his life is turned upside down the day he visits the local library and he meets the Unicorn Lady...


As a big fan of Michael Morpurgo's book, I was very excited to hear that I Believe in Unicorns, one of his best I believe, was adapted in to play for children but I couldn't help but wonder just how they were going to be able to adapt such a beautiful yet intelligent story in a way that it would hook the children in.

Well, the end result was not only as beautiful and intelligent as the book but also completely hooked both my five year old son and myself in for the entire length of the play.

A lot of that rests on the utterly mesmerising performance by Danyah Miller as The Unicorn Lady.  She not only gives a beautifully heartfelt performance but one that could make you laugh, cry and then completely lose yourself in the story she was telling.

During the show, the way Miller used the books that created the set was absolutely mind blowing.  Books were transformed in to kites and houses, even at times turned in to parts of the set that would then have images projected on to them to great and emotional effect.  When the story hits the final third and the war comes to affect the village, the projection is fire used to show the village burning but it's handled in such a subtle way that the emotion of the scene even brought me to tears and I'm 32.  Don't get me wrong, that part of the story is still suitable for the younger ones, it's just that the emotion slowly builds throughout the play that it really does get to you.

On an emotional level, the story itself has always touched me because of how I linked with my son when he first came to live with myself and my wife.  We used a lot of story telling and reading to make him feel at home and as a result, the story has always meant a lot to me.  This adaptation is absolutely spot on and really kept not only the feel of the book but also felt utterly unique.  The way they not only built the story of Tomas around the use of the set but also linked it to the war themes that Morpurgo is known for with added audience participation and also the warm humor and love that runs through it made the show essential viewing for both children and adults alike.

If you are a Morpurgo fan then I can't recommend this high enough.  Go see it then go see it again.  It really is that good.