I Am Santa Claus Review 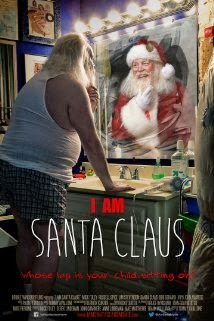 We have documented an entire year in the lives of five real-bearded professional Santa Clauses to find out what the rest of the year is like for a man who perpetually looks like Jolly Saint Nick. In the process, they are shown for who they actually are, flawed, flesh and blood men who feel an overbearing responsibility to protect the integrity of the spotless, untarnished reputation of the 'Red Suit.'

'I Am Santa Claus' is a documentary that poses a question about a ubiquitous holiday figure that few parents ever ask themselves; 'Whose lap is my child sitting on?'


We've all seen them while out shopping during the Christmas period.  The long lines, the hoards of children waiting with hopeful faces just to be able to sit on the lap of Santa.  It's one of the magic moments of the time of year that can sometimes feel rushed and stressful for most but when you see the happiness in a childs face as they tell jolly ol' Saint Nick what they want for Christmas, it's all forgotten.

But have you ever really wondered what makes these people dress up as the universal symbol of Christmas each year?  Who are these people?  Why do they want to do this each and every year without fail?

I Am Santa Claus, takes that idea and runs with it in such a fashion that you are absolutely sucked in to their world.  You want to be involved in their lives and their sheer amount of passion for the big red suit really shows through.

I've read that there has been some controversy over one of the Santa's talking about being gay and the documentary showing the relationship between him and his boyfriend.  I liked that part of the movie and really felt that it gave the documentary a real and personal feel to it.  While he was just one of the many people shown portraying Santa, he was one of the most memorable because he was completely honest throughout the entire movie and at times even brought a tear to my eye.

Another part of the movie that really stuck with me was the inclusion of Mick Foley.  Known as a legendary wrestler for WWE, WCW and ECW, here his well known love of Christmas just flows off the screen as does his unadulterated love for his family.  Those two things merge in a beautiful way so many times during his segments that you just can't take your eyes from him.  He begins a quest of sorts to see if that passion is strong enough to enable him to don the famous suit and become a Santa himself.

All in all, if you have even a passing interest in the holiday period and why people are so interested in bringing the spirit of the season to the world then this is an absolute must see.  It's such a personal documentary that it really feels like you are there with them and watching their lives unfold before your very eyes.  There are even moments that will both bring tears to your eyes and a smile to your face.

An essential movie to see an interesting take on just who the people behind the beards are and well worth watching on this Christmas period.  I would even say that this is one of the best Christmas related movies that I have seen for a very long time.

Posted by Pat Scattergood at 10:24