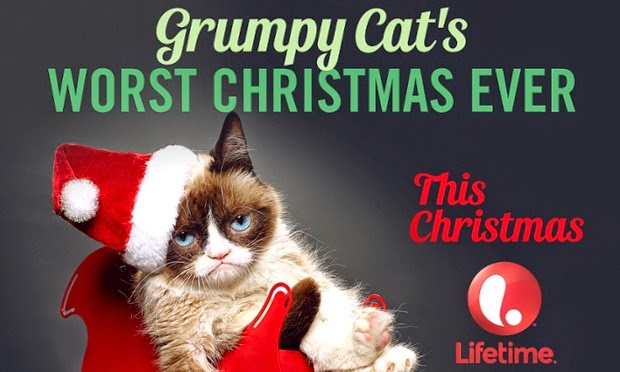 
Grumpy Cat is a lonely cat living in a mall pet shop. Because she never gets chosen by customers, she develops a sour outlook on life...until one day during the holidays, a very special 12-year-old girl named Chyrstal enters the pet store and falls in love with her after realizing she is the only person who can hear this unique cat talk.

As the two develop a close friendship during the holiday rush, Grumpy reluctantly thwarts the kidnapping of an exotic dog she dislikes, and on Christmas Eve rescues Chyrstal after the mall closes. Through her adventures, will Grumpy learn the true meaning of Christmas? Or will it be, in her words, the "Worst. Christmas. Ever?"


I had no idea what to expect when I had the chance to watch this one.  An internet meme of a cat that has distinctive markings that make her look grumpy all the time being turned in to a movie?  I was convinced that this would be a complete waste of time.

Well, after watching this one, I have to admit that some of the scathing reviews of this one were way off the mark.

This isn't going to be the best movie in the world, that's an obvious fact.  I mean it is about a talking cat that looks grumpy all the time.

What we do have here is a story that is funny for the most part, entertaining and kept my little lad hooked all the way through.  The jokes aimed at the world of internet stardom is well written and there are so many targets for the humor that there are some jokes that fall a bit flat and some that are brilliant.  That said, with this many jokes in a movie, you won't have to go too long before the next one.

The story itself isn't exactly original but there can't be that many more ways to tell stories about talking animals set in the festive period.  The story we do have here is fairly well paced but doesn't really offer any new surprises.  There were quite a few parts where you could guess what was going to happen next fairly easily but the story is at least entertaining.

Cast wise, there's a pretty eclectic collection of people here with the most recognisable being that of Aubrey Plaza.  The performances were a lot better than some of the other Christmas movies I've been watching lately but to be honest, none really stood out for me except for Plaza herself as the Grumpy Cat of the title.  She does well with the dialogue and really does capture the feel of the personality that the internet has given the cat herself.

All in all, the movie isn't the best movie in the world but it doesn't set out to be.  The cast have fun with the story and it shows.  The movie is entertaining for the most part but some of the the jokes are quite hit and miss.  At least it kept my little lad entertained and had him smiling so you can't ask for more than that from a Christmas movie really.

Posted by Pat Scattergood at 10:36