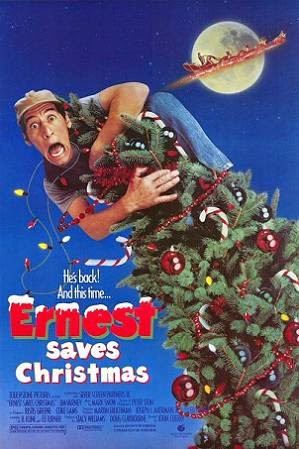 Written By
Ed Turner
B. Kline


Ernest helps a retiring Santa Claus - the real one - find a worthy replacement to carry on the holiday season.


Well for the first of the Christmas reviews that will be appearing on this site, I figured I would revisit a movie that I haven't seen since I was very young.

Ernest Saves Christmas is one of those old Christmas movies that you remember watching when you were a youngster and having fond memories of it.  The problem with that kind of movie is that it will hardly ever live up to those memories but would this one be the movie to do that for me?

My memory of the movie was that it was a hilarious, slapstick comedy marathon that had me howling with laughter.  Now I've watched it again, after more years than I care to remember, I have to admit that it's not that at all.

There is the wide ranging slapstick here that Reg Varney was famous for.  Some of it is utterly hilarious and other parts just had moaning but the movie itself is more than the sum of it's parts.

The thing that I didn't remember about the movie is that it's quite an emotional movie.  The story of a retiring Santa Claus needing to find a replacement isn't an entirely new one in movies, especially in a seasonal one, but it's handled pretty well here.  Whenever Douglas Seale is on the screen, you can't take your eyes from his performance.  He's so sympathetic in places that it really tugs at your heartstrings throughout the movie.  I loved the reasoning behind his retirement and that he just wanted to do the best he could as a 'last hurrah' before handing over the reins to the best possible person.  The slapstick sometimes got in the way of that but for the most part, it gave a bit of comedic relief to proceedings.

All in all, while not the best Christmas movie I've ever seen, it is most definitely not the worse by a long stretch despite my memory remembering it as a nearly entirely different kind of movie than it actually is.  The heartfelt performance by Seale makes it worth watching and really gives a movie that would otherwise just be a bit of a silly comedy a strong heart.

Posted by Pat Scattergood at 11:28