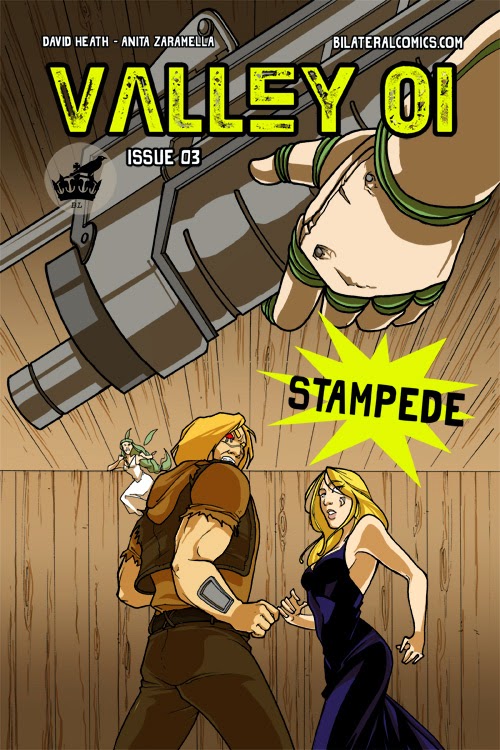 Art and Cover By
Anita Zamarella


EROS-68 and Bartlett struggle to communicate, while troops from Charris close in on finding them…can our crew of intrepid rogues make it out of this situation?

Charris…Valley-01…two planets that exist within plain sight of each other. Past conflicts have defined these worlds, leaving one a barren, anarchic wasteland and the other a breathtaking, technologically advanced utopia.

Ten years have passed since the last direct battle, but tensions will once again flare as a mysterious, renegade machine lands on Valley-01 searching for its own freedom.


After the brilliance of Code 991, I was wondering just what else we were going to get from the Bilateral Comics crew next.

With Valley 01: Issue 3 we have gotten the next part of Bartlett's adventures and it can't have come soon enough.

When I read the first part of the story, I was taken with the fact that it was exciting but it had a bit of a darker comedic element under the surface of the story itself.  Here we have the action quota ramped up in such a way that there isn't all that much dialogue in this one.  Instead, the action takes centre stage and really puts forward just how much danger the characters are in.

Here, Heath really ramps up the tensions between the characters and just how much trouble they have really gotten themselves in to.  We are told a little bit about why they are after the renegade machine but not too much as to waste any of the twists.  I would say it's best described as we are told enough to grab our interest and want to grab the next installment.

We're also soon a little more of Bartlett as well in that, he's shown in full science fiction action hero glory.  He really comes across as a bit of a bad ass so I can't wait to see where Heath is going to take him next.

Art wise, the story is full of bright colours and sometimes off kilter angles.  I liked that approach as it gave it a quirky, almost Japanese feel to it all.  That's most evident in the battle sequences because while they are busy and full to the brim with things going on, it doesn't feel overcrowded or confusing.

All in all, I'm definitely a fan of this story and I can't wait for the next installment.