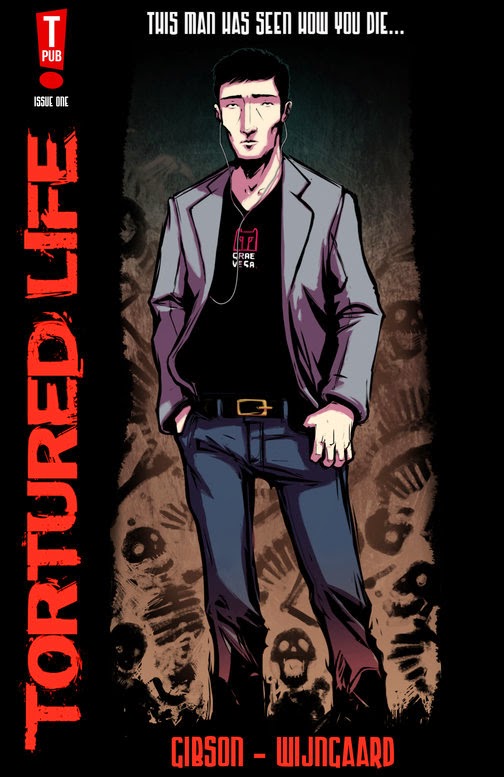 Art and Cover By
Caspar Wijngaard


Richard Carter has the supernatural power to see how people are going to die.  At first Richard tries to help people - thinking his gift was something that would allow him to save lives.

Unfortunately for Richard, this was not the case.  He's destined to watch those around him die, completely powerless to stop the gears of fate from moving towards their death.

Richard takes to living a life of solitude in order to prevent anyone getting close to him, desperate to stop the visions that plague his every waking moment.

The visions aren't the only thing to have appeared in his life, so has a supernatural creature known only as The Bloody Man, a half alive and half dead creature intent on only one mission.  Killing Richard Carter!


After reviewing the graphic novel titled Tabatha that T Pub put out, the guys involved very kindly gave me the chance to review the first two issues of their new series that will feature themes that are very familiar to any fan with even a passing interest in supernatural horror stories.

The one thing that puzzled me was the simple fact that with such a well worn premise as someone being able to see how people are going to die, would the series suffer from feeling a bit like you had already read it albeit in a different guise?

Well after reading the first two issues, I can definitely say that's not the case here.  With Gibson's writing being so on point in Tabatha, I had very high hopes for these two issues and he didn't disappoint in the slightest, if anything I was even more impressed.

One of the main strengths of the two issues is the simple fact that the team doesn't feel the need to have to explain everything straight from the off.  The pacing leads slowly but surely in to Richard's world that it feels almost unsettling in places.  The best way to describe it would be when you get that feeling that something bad is about to happen but you're not sure what that thing will be or when it happen.  That runs through the first issue brilliantly and then leaps in to the second almost seamlessly.

The story flowing in such a way comes to a head in the final third of the first issue that leaves you feeling so hooked in that you feel utterly desperate to see just where Gibson is going to take the story next.  I felt that to such a degree that I dove straight in to issue two and I am massively glad that I did.  The story carries on it's pacing but ramps up the feeling of dread and horror without missing a single step.  I am massively intrigued with the character of The Bloody Man and, in the same way as Richard, I can't wait to see find out more about him and how he is going to interact with the other characters.  The story really feels like it is going to hit the reader with something huge and I can't wait to see just what that is going to be.

With Caspar Wijngaard handling the art duties you know what you are going to get and that is art that will help the story flow through your head almost as if it's a movie unfolding before your very eyes.  The almost washed out look of some of the pages made me think of those old school 1980's horror movies that I not only grew up watching but still love now albeit with a modern edge.  The use of facial expressions and shadows here is masterful and really gives the story an even creepier feel.

The highlight of the two issues for me definitely has to be the art and the way that it fits the writing almost like a glove.  It captures the bright, playful nature of life but veers in to the darker side of things with a nearly morbid glee yet it's subtle enough to work without feeling disjointed and messy.

All in all, this is one of those series that you just have to pick up.  It is definitely going to be one that you will want to stay with and see through to the end.  Hell, I can see it being a series that I can see the fans returning to time and again just to try to capture all the little details and clues that Gibson and Wijngaard have slipped in to the story.