The Power of Tank Girl Review 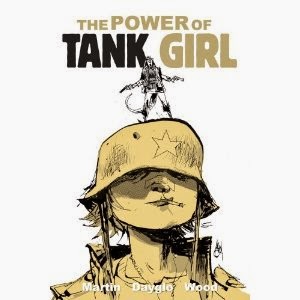 Collecting three graphic novels - The Gifting, Visions of Booga, and The Royal Escape - The Power of Tank Girl presents an all-out blitzkrieg on the senses.

Never before has so much dense naughtiness been crammed into such a perfectly portable pocket-size book.

Hold onto this - this is your bible for the apocalypse!


I have to admit.  Tank Girl was one of the first comics I ever read.  That alongside Batman and The Punisher sent me on my merry way in to becoming a major comic book fan.  That said, I haven't read any of the Tank Girl stories for a long time but when Titan Comics announced that there were going to release a collection of three graphic novels, I was excited.

With this collection, The Power of Tank Girl, we are plunged head first in to the complete and utter insanity that is Tank Girl.

Starting off on a rather strange note in the shape of The Royal Escape, you are thrown head first in to the adventures that the rag tag gang go on.  I have to admit that I was a little baffled by using this one as the opening story.  If you are a complete newcomer to Tank Girl then you could find yourself completely lost for large chunks.  That said, as a fan, I absolutely loved the inclusion of this one.  Balls to the wall action, foul mouthed tirades, hilariously politically incorrect jokes and more all really worked brilliantly well to show just how much fun Tank Girl really can be.

Visions of Booga is up next and feels a little out of place if you were expecting the same as the previous story yet it works.  It's a softer story but works so well that it will really bring you in to their world and make you want to know a lot more about the characters themselves.  A great and unexpected addition to the collection.

Lastly we are treated to The Gifting that is the sort of story that someone that has heard of Tank Girl but never read any would think the charcter is about.  For me, it's weaker than the other stories in that while it's really good story wise, it just didn't grab me as much as the other two.  Don't get me wrong, it's an interesting story but I feel that The Royal Escape is by far the best of the bunch included here.

As well as the graphic novels, we're also given some of the classic strips featuring the legendary and some may say infamous character.  We're also given posters and information pages as well.

If you are a Tank Girl fan then this is an absolutely essential purchase for you.  The stories definitely give you a brilliant over view of the sheer insanity of the adventures they go on as well as the crazy nature of the characters.  You may be a little bit lost if you have never read one of these styles of stories before but give it a go, you never know you might find yourself a new obsession.