The Doctor: His Lives and Times Review 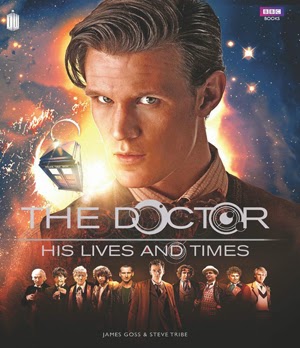 
He's made a mark on almost every era of history, and he's touched millions of lives across space and time.  In these pages you'll find just some of the stories behind those brief encounters, each of them addressing the question that must never, ever be answered: 'Doctor Who?'

This is the story of an impossible life - of a man who borrowed a spaceship, travelled through time and continually saved the universe - as told by the Doctor's friends, by his enemies, and by the man himself.


As a long term 'Whovian' myself, I will pretty much read anything about the show, the characters and the people that work so hard to bring them to life.  Granted, you have probably noticed that on the visits to this site.

When I was bought Doctor Who: His Lives and Times by my wife, I couldn't wait to read it.  The life of the one of the most iconic characters on British television told through his own eyes and those of the characters he encounters along the way is such an interesting way to get to the core of the character.  I was a little bit worried that it may come across as a bit of a gimmick book and one that you could only read the once but this book had the complete opposite effect on me.  Each time you read this one, you notice something new each time.  Not only do you get the absolute treasure trove of information and character work here but there are little nods and winks in the background of the pages as well.  No doubt there'll be some eagle eyed readers that will sit down and note every little link in there but that's not my style.  Where would be the fun in that?

We get sections of the book from all the versions of the Doctor and while that should make the book disjointed, the way it's all set out the things that we see here just flow as if one huge story.  I suppose in a way the character and his history is exactly that.

The various versions of the iconic character are handled brilliantly here.  Each has their own distinct personality that matches the performances that we fell in love with on the television show itself and the writing really captures that in such a way that you feel like it really has been written by that character and that really shows the love and respect the writers have for the show.

If you are a fan of Doctor Who then this is definitely one of those books that should take pride of place on your shelf.

Email ThisBlogThis!Share to TwitterShare to FacebookShare to Pinterest
Labels: BBC Books, Book, Doctor Who, His Lives and Times, Review, Television Tie-In, The Doctor