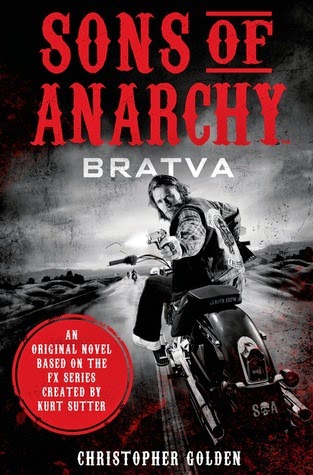 
Set after the fourth season of the groundbreaking television drama Sons of Anarchy, from the mind of executive producer Kurt Sutter.

With half of the club recently released from Stockton State Penitentiary, and the Galindo drug cartel bringing down head at every turn, the MC already has its hands full.  Yet Jax Teller, the VP of SAMCRO, has another problem to deal with.

He's just learned that his Irish half-sister, Trinity, has been in the United States for months, entangled with Russian Bratva gangsters.  Now that she's abruptly gone missing, he's sure the brewing mafia war is connected to her disappearance.

Jax heads to Nevada with Chibs and Opie to search for her and seek revenge.  Trinity may be half-Irish, but she's also half-Teller, and where Tellers go, trouble follows.


As a fan of the Sons of Anarchy television show, I was a bit worreid that a tie-in novel may go the same way as quite a few other tie-in novels.

Some end up a bit hit and miss with the writers not really getting the hand of the characters or the themes of the show that the stories would be based on.  Others seem to fit hand in hand with the show and even add to the mythology as well.

Sons of Anarchy: Bratva is the sort of tie-in novel that assumes that you are already a fan of the show itself and really puts it's foot to the floor in order to get proceedings underway and for the most part it works.  I was a bit puzzled that a writer such as Christopher Golden, best known for his science fiction and fantasy novels, was chosen to pen a story set in the world brought to life by people such as Kurt Sutter yet he does a really good job of really tapping in to the themes that made the cult show so popular.

There are moments where if you haven't seen up to season four or even seen the series at all then you will be a bit lost but that said, this is the sort of novel that is penned for the already existing fans and in that way, it does it's job very well.

The characters that we know and love to hate are here as well as new additions to the Sons of Anarchy world and that's where Golden really lets fly with his writing.  The new characters really sit hand in hand with the already exisiting ones in such a way that they wouldn't have been out of place in the show.

Story wise, it's paced very well and there are some brilliant twists and turns.  There are some moments that really feel like they have come from the screen and you can envision the characters easily, which is one thing that raises it above some of the other tie-in novels I have read recently.

All in all, while it doesn't stand up as a stand alone novel, if you are a fan of Sons of Anarchy then Bratva is a book that really will impress you and be enjoyed but if you're not a fan of the show then maybe give it a miss.