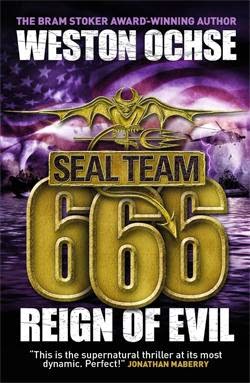 
Legend holds that when Britain is in its darkest hour, King Arthur will return to save the country, if not the world. The legend is dead wrong.

When a group of Druids sacrifice the lives of a group of innocent people, including the fiancée of a member of SEAL Team 666, the ancient king is brought back from the dead and sets his sights on subjugating humanity and cleansing his land of all who are not true Britons.

Because of political sensitivities, Triple 6 is ordered to stand down, but that order is ignored by one of them seeking his own vengeance. Now, the members of America’s elite supernatural-hunting team must decide what is more important: their orders or their loyalty to a member of their team.


As I've been reading the SEAL Team 666 series, I've enjoyed it for the most part.  The first two novels were solid and exciting novels with a real feeling of dread that ran under the surface of the stories themselves.  I'll admit that there were a couple of moments in there that felt a little forced but I still really enjoyed them.

With this, the third novel in the series, I was wondering just where Ochse would be able to take his characters after seeing the things that happened to them in the first two stories.  Here we are treated to some really well thought out character development.  The best part of this was seeing the way that Ochse put across the feelings of confusion and duty in the teams battle to work out whether to follow their specific orders or to follow the member of the team that is going off to gain revenge.  The personal battle that each member of the team feels internally is really well written and shows a lot of confidence in the writing of the characters.

The strength of the novel is by fair the mix of genres here is so well handled that it doesn't once feel disjointed.  We have the supernatural element that has made the first two novels so popular, the mythological feel of the King Arthur fable, the sheer balls to the wall feel of the military side of things and much more.  The mix of genres works so well that it really comes across as a real 'page turner' of a novel.  I couldn't wait to see just what was going to happen next story wise.

I would go so far as to say that this third installment of the series is by far my favorite.  Where there just seemed to be something missing from the first two novels, Reign of Blood really feels to be the most accomplished of the three by far.  The pacing is better, the characters are really coming to life and then there are some twists and turns that are really going to be felt in the next novel for sure.