Behind the Sofa: Celebrity Memories of Doctor Who Review 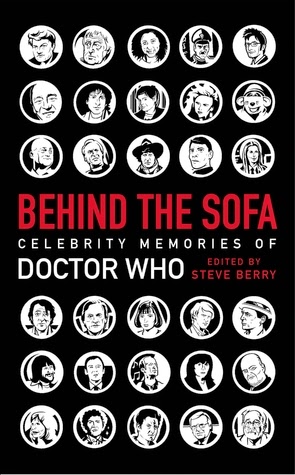 
Behind The Sofa is a collection of over 100 celebrity memories of Doctor Who, compiled in aid of Alzheimer's Research UK. Steve Berry decided to undertake this project in memory of his mother Janet, who suffered from Alzheimer's in her final years and passed away in 2009.

The book has taken more than four years to put together and its publication has been "crowd-funded" by the pre-orders of an enthusiastic Whovian community. 100% of the book royalties, proceeds and net profit will be donated to Alzheimer's Research UK.

Contributors include comedians Al Murray, Stephen Merchant, and Bill Oddie; actors Lynda Bellingham, Nicholas Parsons, and Rhys Thomas; writers Neil Gaiman, Jenny Colgan, Jonathan Ross and Charlie Brooker and politicians Louise Mensch and Tom Harris. In addition, there is input from a number of the writers, actors and production staff who were involved in creating Doctor Who stories new and old.

"I always had a sneaking suspicion that everyone in the world loves Doctor Who. Now I have proof! If I could get all the famous names who contributed to this book into one room, it would be the maddest Doctor Who party ever. Until then, their favourite memories of the programme are preserved for all to see. Plus, everyone who buys a copy will be helping to give hope to the 820,000 people in the UK living with dementia today," says author Steve Berry.

The book has been beautifully illustrated by popular Doctor Who Magazine artist Ben Morris and is a must-have for Whovians worldwide.


I must admit that I've never been all that fond of those 'talking head' type shows where people sit down and talk about how they like something.  It's normally whatever is in vogue and popular at the time which then leads to people talking about it that have no idea what they are talking about.  That generally lends it quite a fake feel.

However, being a massive Whovian myself, I was massively excited to be given this book for my birthday.  Not only is it about one of my favorite shows of all but the proceeds of the book go to a charity that is very close to my own heart so what more could you want?

Part of me was a little worried that the book would be full of people that I had connection with talking about the show, which has been majorly popular since it's return with Christopher Eccleston at the helm.

That said, the people here are so varied that there really is a story here for every type of Doctor Who fan out there.  You have people that have been in the show itself, you have writers, you have television show presenters and even a foreword by the legendary Terry Pratchett.

The memories here range from the heart felt to the incredibly funny and much more.  I loved seeing each persons memory of the show being different.  Doctor Who has always been a show that has meant different things to different people and that is hugely evident here.  You will find yourself saying "me too" out loud more than once.  I know I did.

One of the things that really made me smile were the illustrations by the artist Ben Morris, who works for the Doctor Who magazine and that really lends itself a really authentic air to the whole book.

If you are a Whovian through and through or a newcomer to the show itself, this book is an endearing addition to your collection and well worth picking up.

Email ThisBlogThis!Share to TwitterShare to FacebookShare to Pinterest
Labels: Behind the Sofa, Book, Celebrity Memories of Doctor Who, Doctor Who, Dr Who, Gollancz, Review, Steve Berry, Terry Pratchett