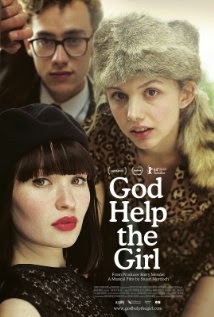 Written and Directed By
Stuart Murdoch

Teenager Eve (Emily Browning - Sucker Punch, Magic Magic), is in hospital dealing with emotional problems and writing songs as a coping mechanism. She absconds and befriends gawky guitarist James (Olly Alexander – Gulliver’s Travels, Le-Weekend), a fellow aspiring musician who works in the local leisure centre and Cassie (Hannah Murray – Skins, Dark Shadows) another young vocalist who dreams of being in a successful band. Together the three embark on a musical journey which transcends into a story of self discovery and acceptance over the course of one dream-like summer.


I'd been warned by a couple of other reviewers that this movie was completely pretentious and one that wasn't worth watching.  I decided to ignore that for the simple fact that it had the seriously under rated Emily Browning involved and I'm glad that I did.  I'm not sure what movie they watched but the one that I put in to my DVD player was one that had a warm, emotional story to it and some great performances.

The story itself isn't one that will set the world alight with its originality but for the most part, the movie came across as genuine, sweet and even funny.  A lot of that is down to the music itself, covers of songs by Stuart Murdoch from the much loved band Belle and Sebastian.  There were a couple of moments where the songs themselves felt like they had been shoehorned in to the movie itself just so they could be included but nearly all of them worked superbly well in the context of the movie.

Emily Browning was a superb piece of casting for this movie, even providing some of the vocals for the songs themselves.  Browning gave a wonderfully emotional and sympathetic performance as Eve throughout the movie.  She has always had a brilliant screen presence and it's on full show here.  I would even go so far as saying this is completely her movie and she makes the character of Eve seem so realistic yet flawed to the point of you feel so drawn in to her world that it's almost as if you are there with her.

It's the same with the rest of the cast.  They more than hold their own with the material they are given.  It's just that Browning shines so brightly that there are times when you can't take your eyes off of her performance to the detriment of the others on screen.  Don't take that as a knock against their characters because it's really not intended as one.  They give the characters their own personalities and traits that really bring their quality to the forefront.

The only thing that I didn't like about the movie itself is that there are things mentioned about the characters lives that just feel unfinished and are left hanging because of the fact that there just didn't seem to be the time to explore them properly and that's a real shame.

All in all, this is a movie that is worth checking out.  It give me a feeling of the old movies that Elvis Presley used to do yet with an indie sensibility that made it sitting down to watch.