Doctor Who: Shada - The Lost Adventure By Douglas Adams Review 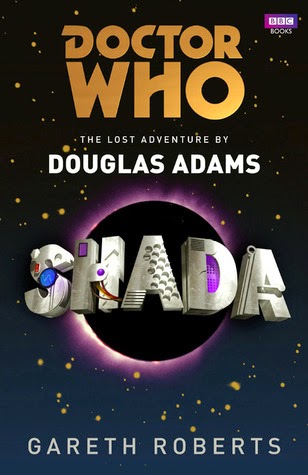 Based On
The Doctor Who: Shada screenplay by Douglas Adams


Inside this book is another book – the strangest, most important and most dangerous book in the entire universe.

The Worshipful and Ancient Law of Gallifrey is one of the Artefacts, dating from dark days of Rassilon. It wields enormous power, and it must not be allowed to fall into the wrong hands.

Skagra – who believes he should be God and permits himself only two smiles per day – most definitely has the wrong hands.


Shada is a name that has gone down in history for Doctor Who fans.  Written by the late, great Douglas Adams, the serial went largely unfinished due to a strike at the time of filming and therefore has been released in many different versions to varying degrees of success.  You have the version where the missing scenes are talked about by Tom Baker, a version with Paul McGann's incarnation of the Doctor and even fan versions of the story itself.

Some of them have been well done and others have been, rather politely, depressing due to the fact that you could see that the story would have been an absolute belter of a tale for the Tom Baker version of the long running character.

When it was announced that Gareth Roberts, himself a writer for the new version of Doctor Who, was going to tackle the tale in novel form, I was hesitant to get excited about it.  Yes, he had written some good tales before for the character but how would he take on the Douglas Adams tale without it ending up like someone just trying to copy Adams' unique and near lyrical style.

After reading it, there is one thing that really jumped out at me.  Roberts clearly has a respect and love for both the series and the character himself because he has managed to create one of the best versions of the near mythical tale that I have ever read.

For both long time and new fans of the series, this novel does something that I found really impressive.  You honestly can't see the 'joins' where Adams ends and Roberts begins but it does that all while keeping Roberts unique style and take on the character.  Apparently he worked from scripts, footage and much more to create this story and it shows.  Shada for the first time, in my opinion, finally feels fully fleshed out and absolutely gripping.  With Baker being one of my favorite versions of the Doctor, Roberts has captured the characters almost hyper and manic style without it coming across as over the top.  That's the first time in a long time that I have read a story based around the Baker era that has gripped me in such a way that I couldn't and wouldn't put it down until I'd reached the very end.

Another thing that I found really hooked me was the dry, almost cynical humor that ran throughout the story.  You could almost picture the characters themselves while reading it.  Even the characters that were created specifically for this novel just feel so at home in the story that they really do come across as characters that would have fitted in to the show with no problem at all.

If you are a newcomer to the classic series or even a long time fan then this is definitely the release of the famous, although some may say infamous, Shada story that you have been waiting for so grab yourself a copy.