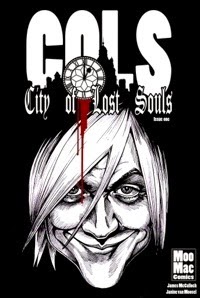 
City of Lost Souls is a dark urban fantasy about a serial killer named Matt that takes his own life only to discover his eternity is his own personal hell surrounded by his victims. Given the chance to redeem himself he is pulled out of his torment and given the chance to find the mythical City of Lost Souls where his victims can finally rest, however, the creatures from the other side are hunting him down and if they catch him it spells disaster for Matt and those he has wronged.

Bad language and violence from the start.


After having this one recommended to me by a fellow writer, I couldn't wait to get my hands on it and sit down to read what I hoped was going to be a chilling and exciting tale of murder and redemption.

But what did I end up getting?

One of the things that struck me first was the fact that City of Lost Souls came across as an angry David Fincher story.  The writing by McCulloch really punches the reader in the gut and keeps on punching all the way through.  I loved how the story came across as cynical, bitter and, in places, incredibly twisted.  The story definitely feels that this was just a warning shot and that there is a lot more to come from the supernatural and violent element of the story.  In fact, it almost felt like it was luring the reader in to a false sense of security by being violent and shocking straight away in order to make you feel like it will settle down later in the series but in all honesty, I am thinking that all of that is going to get ramped up.

The art here by van Moosel is incredibly striking and really makes a fantastic use of the black and white style as well as the shadows and sometimes off kilter angles.  It felt almost like a violent art house film in a way because van Moosel doesn't come across as an artist that will just go for the easy shot or setting.  The way the details are picked out in some scenes and not in others creates an almost other worldly feel to the story and that helped this story really grip me in.

If I was to pick a flaw, and it's a relatively minor one if I'm being completely honest, is the lettering on some of the dialogue.  While I liked the fact that the fonts would change from the real world in to the demonic world, there were some moments where the main characters dialogue felt a little too safe with the font that was used.  However, like I said earlier, that's a minor complaint.

All in all, this is a superb first issue and one that really makes me excited for the second issue.