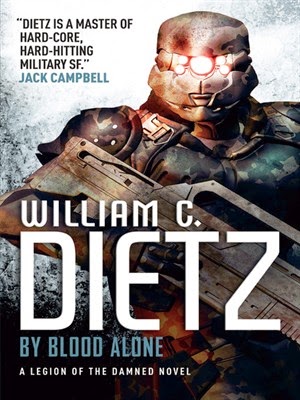 
A generation after the second war against the Hudathans, discontent is growing in the Human Empire, and military cutbacks see many former legionnaires out on the streets.

When Bill Booly III, son and grandson of the great war heroes of the same name, refuses to give false testimony in the military court, his punishment is being sent to the most unpopular place in the galaxy: Earth.

But when a group of rogue legionnaires try to overthrow the government, Booly finds Earth the pivotal point of the battle - a battle which can't be resolved by blood alone.


If you are a visitor to this site then you will know I love my science fiction books and especially my William C. Dietz books too so it should come as no surprise that I'm sat here reviewing this one.

The thing that struck me about this further addition in to the Legion of the Damned series is that while it is a very exciting and action packed science fiction story but it also serves as quite a cutting social commentary on how not only the military treats their own members but also how we treat them when they come back after seeing battle.

Dietz has a talent for not only crafting well thought out and exciting science fiction stories but they also have a feeling for them running under the surface of feeling completely realistic.  With this story, it really links in with the world of today where we are always reading in the news that a veteran has been made homeless or in dire trouble and that's part pf the story here.  That could have been a really heavy handed story to include in the Legion of the Damned series but Dietz not only handles it with a gentle and touching hand but it gives the story the spark to really come to life.

Another one of the biggest points for me with this installment is that it not only rewards the long time reader such as myself but it also can serve as a superb jump on point for newcomers to the series without leaving them too far behind.  That's a tricky thing to pull but Dietz pulls it off with aplomb.

The way Dietz juggles the personal touches of the characters, the political intrigue as well as the exciting moments of the coup is one of the things that really raises this one high above some of the other science fiction novels that have been coming out this year.

All in all, this novel is a superb installment in the series but also serves as a well paced and exciting set up for the next novel and I, for one, am eagerly awaiting for the next installment.