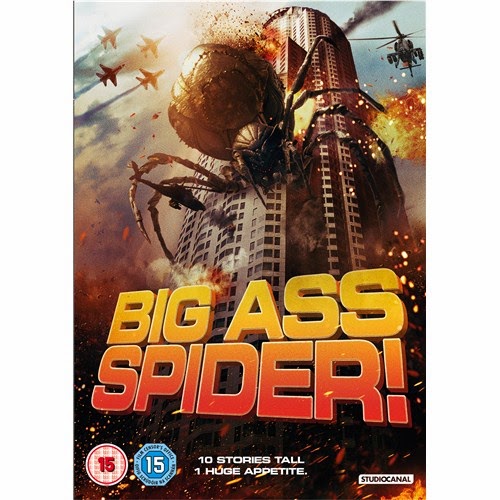 
When a giant spider escapes from a military lab in Los Angeles a full scale military strike fails to stop the giant beast. It all comes down to a team of scientists and one clever exterminator are the only thing standing in the way of the total destruction of the city. Will our exterminating hero be able to save the world as well as tough chick turned damsel in distress Karly from the web of the largest spiders every to have roamed the Earth.

Sometimes a movie comes along with an absurd title that not only lives up to it but also proves to be massively entertaining.  Sometimes in a 'so bad it's good' kind of way and other times in a way that you just can't explain.

Well, with this film, you know exactly what you are going to get and you will love every single second of it.

When you see a title like Big Ass Spider! you know that you are not going to get an Oscar winning movie along the lines of Schindler's List or a Saving Private Ryan but that doesn't mean that this isn't worth a watch.  In fact, I watched this movie because of the title and I am glad I did.

The thing that struck me about the movie is that it knew exactly what it was and what it was going to end up being like and that's exactly what it went for.  With self referencing nods, some great cameo appearances and some one liners that had me howling with laughter, Big Ass Spider! just came across as a complete 'switch your brain off' and relax kind of movie.  It didn't take itself at all seriously, the characters would mock themselves and the stuff going on around them and would even mock the absurd nature of the action.  I have always been a fan of that kind of movie and this one does all of that but with a knowing and endearing charm.

A lot of that comes down to the cast.  With some of the dialogue that they are given, they just look like they are having the absolute time of their lives making the movie.  I love the fact that Lin Shaye and Ray Wise were reunited in this movie.  Despite not having any scenes together, it was great to see them in a movie like this again after the brilliant Dead End that they were in together.  Shaye always has a knack of stealing every scene she is in no matter how big or small the part is and it's not different here.  Wise always manages to add a bit of cynical class and sarcasm wherever he goes and once again, he does that here with a knowing wink at the camera.

The best part of the movie for me was definitely Greg Grunberg and Lombardo Boyar.  The relationship between their characters and the way they reacted to the action around them had me in tears of laughter on so many times that I lost count.  I even had to pause the movie a couple of times because I was laughing so much at their antics.

Is this a movie that is going to set the movie world on fire?  No.  Is this a very fun movie that will entertain you and have you laughing until your sides hurt?  Yes, most definitely yes.

Big Ass Spider! is a movie that will most certainly develop a cult following and it will be well deserved.

Posted by Pat Scattergood at 13:27