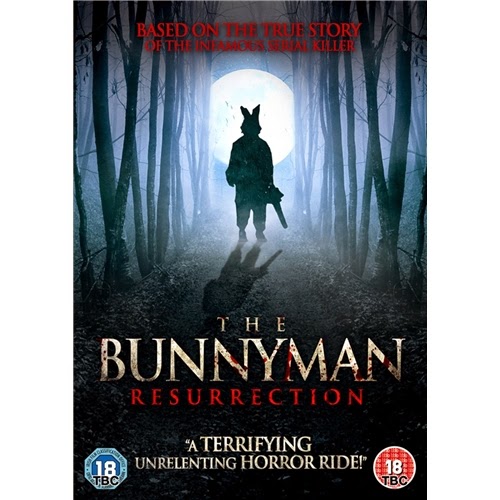 aka The Bunnyman Massacre, Bunnyman 2

Written and Directed By
Carl Lindbergh


Joe and Bunnyman's adventure continue in a rural ghost town. Bunnyman's blood lust knows no bounds, as he slaughters indiscriminately anything that crosses his path. Joe is all too happy to encourage his behavior, selling the dead victims as beef jerky in his local store.

In addition to Joe's body disposal problem, the local sheriff becomes suspicious with the disappearance of a few of his deputies. His investigation crosses paths with two persistent sisters, that refuse to die at the hands of Joe and Bunnyman. Some will live, and some will die, but all will be damaged.


I have to admit that I hadn't heard of the first Bunnyman movie or even that this one was a sequel until I looked up some information about this one.

One of things that made me the most interested to take a look at this was, rather weirdly, the idea that a man would dress in bunny outfit in order to go on a killing spree.  A strange reason to watch a movie perhaps but this is the site that reviewed One Eyed Monster, a movie about a killer alien penis.  Another reason was the simple fact that the amazing Maria Olsen appeared in this one.

The thing that bothered me the most was that the first half hour was very interesting and really had an interesting feel to it.  I wanted to know just why these guys were so messed up.  I wanted to see more of them.  Lindbergh really put forward some interesting ideas and gave the scenes a really creepy look to them but then it went down hill from there.  It was almost as if he wanted to make a short movie but then realized that it needed to be longer and just threw random and badly acted parts together.

I'm not sure what happened with the cast performances in this movie but in the first half hour, they were interesting, gritty and really worked well with the movie itself.  Then it felt almost like they were too tired and wanted to just get it over and done with.  That's a real shame because it made the movie almost painful to watch at times and not because of the gore either.

Talking of gore, it suffered the same problems as the rest of the movie.  It started off as looking really well done and like they had really used their budget well but then the rest of the movie, the effects looked really rushed and sometimes even unfinished.  One of the deaths that looked almost comical involved a chainsaw where the victim was moving but it was clear as day that she was in front of it because when she moved you could see the big space between her and the killer.  I actually had to pause the movie itself because I'd started laughing, which I'm going to assume wasn't the reaction the director was going for.

All in all, other than the admittedly brief appearance by Maria Olsen and the well made first half hour, I can't really recommend the movie itself.  There were flashes of a great movie in the first half hour but then it went downhill quicker that a go kart on a slope.