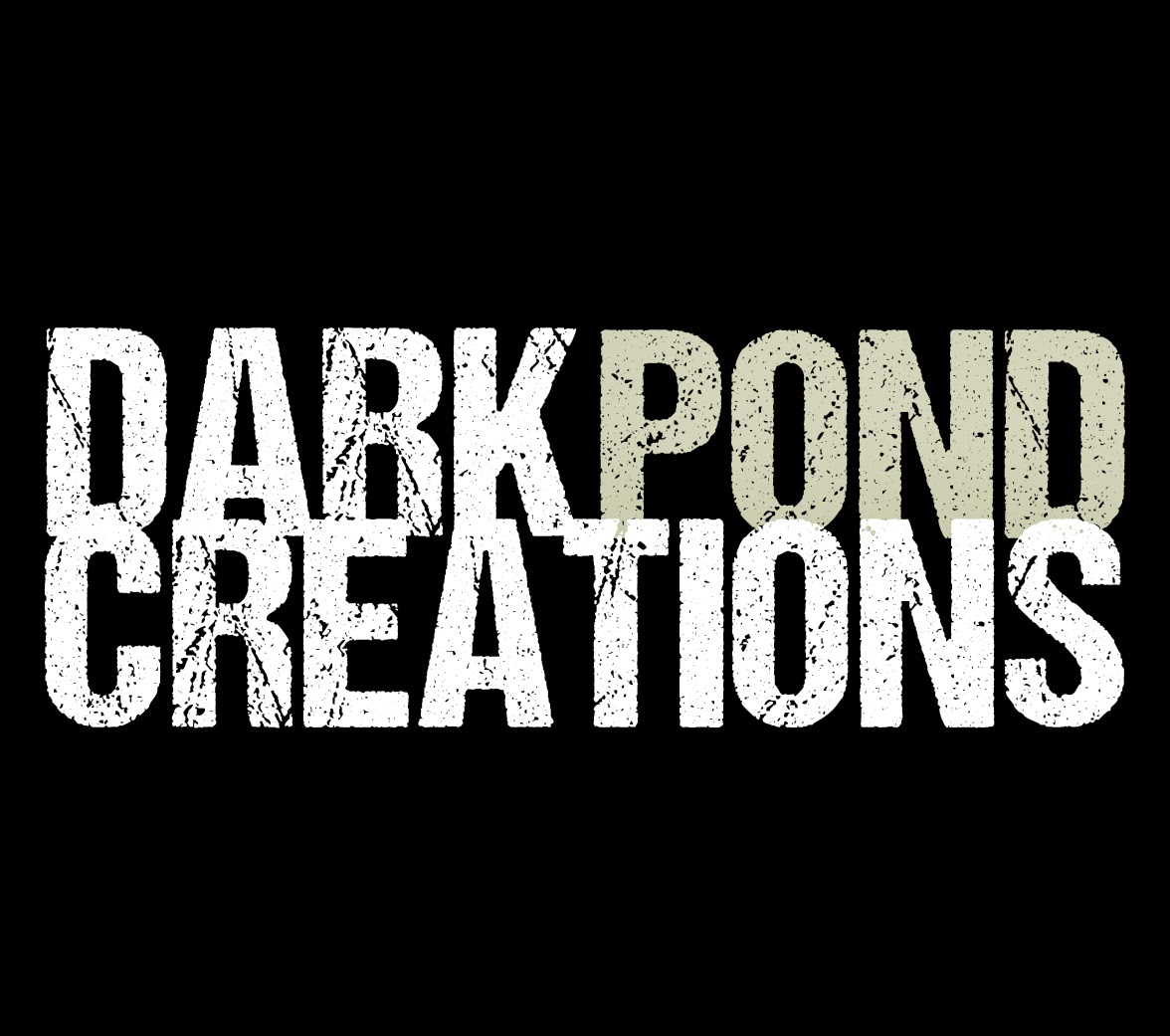 At the end of August, Dan Charnley and myself were very honored to be invited to be a part of the first event held by the Comicbook Facebook Group that was helmed by Sam Johnson, author of such comic books as The Almighties, Cabra Cini and Geek Girl.  So here we are talking about our first release Flesh Tones.

SJ: Hi guys; so is Flesh Tones the first comic for the both of you, or the first you've worked on together?

PS: It's the first comic for me to be put out there but I've been writing stories here and there for a few years but it was only after meeting my now wife that I had enough confidence to approach people about drawing my stuff. But this is our first title together, hopefully the first of many.

I actually approached Dan Charnley here through a different project that fell through as I wanted a little more control over the story and the art itself so we got to chatting and decided screw it, we'll do it ourselves.

DC: I've illustrated some self published work before, but this is the first time i have worked with someone else. I could not be more happier.

PS: Dan Charnley was in charge of the art itself and my wife Ashley Scattergood played around with the fonts and the placing of the logos and that kind of thing to really bring Dan's superb art to the forefront where it belongs, because let's face it, his art really is striking and eye catching.

SJ: Indeed, your art has a photo-like quality to it that brings a strong feel to your story. What can you tell us about the story itself? 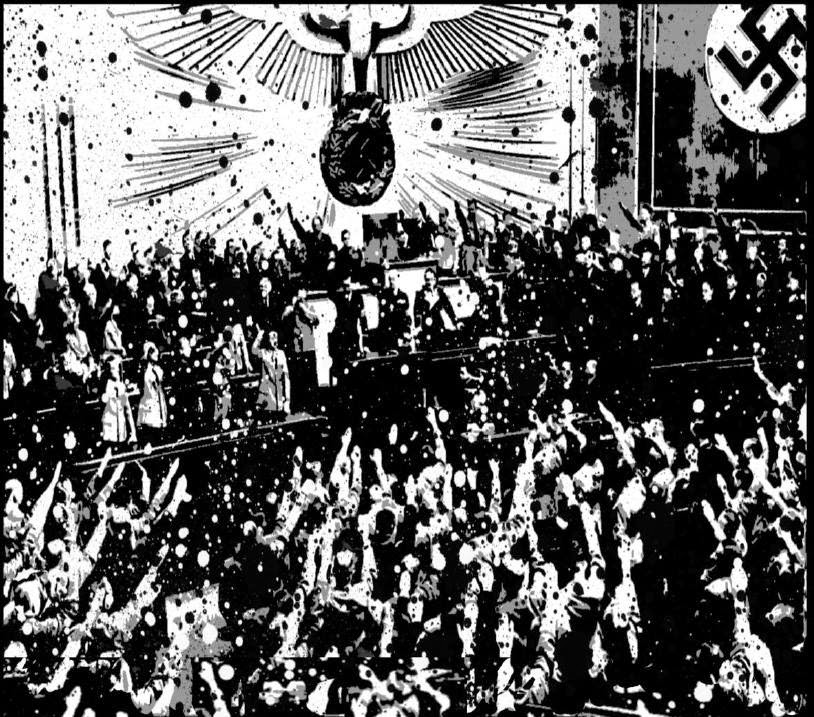 PS: That's a prime example of his work in the comic itself. That simple picture manages to be haunting, eye catching and full of details that you can't look away

DC: When Pat approached me to do some single illustrations, we just seemed to connect over art and ideas, certainly the horror stuff.

PS: Well there are two stories in the first issue. One is The Mansion illustrated by Lee Taylor, which takes a completely different route. That was the first comic book story I had ever written and purely for selfish reasons I jazzed it up and put it in my first release. That one was just pure zombie story because I loved the idea of just writing a zombie story due to being a zombie movie and story fan myself.  I did also manage to sneak a couple Dr Who references in there too.

However with 'Real Horror' the story Dan did, I got the idea simply from hearing someone saying that the world was going to Hell and that set me thinking. What if it really was? What would happen? Would there be some sort of diety involved and what would that diety think? then I thought who better to draw something demonic and bring out the horror in real life than Dan Charnley?

DC: I'm a massive fan of the horror genre. That's why we hit it off so well. the story gave me a chance to try every technique i could think of. It was a great opportunity. I'm not 100% confident about my comic work, I'm about as opposite as can possibly be for a comic book style.

SJ: 'I'm about as opposite as can possibly be for a comic book style.' D'you mean in comparison to super-hero books, Dan?

DC: Yep. Pretty much. They do nothing for me now. They have brilliant writers and art, don't get me wrong, but they just leave me cold. I cant even think of the last time I bought a Marvel title. I first saw what the potential for comics could be when I picked up Black Orchid, illustrated by Dave McKean.

PS: I think Dan's art is utterly unique to the comics out there regardless of genre. It's all good grabbing a Mignola title or a Oeming title but you know what you'll get. With Dan here, he knows so many techniques and styles that he can mould that to anything you want. 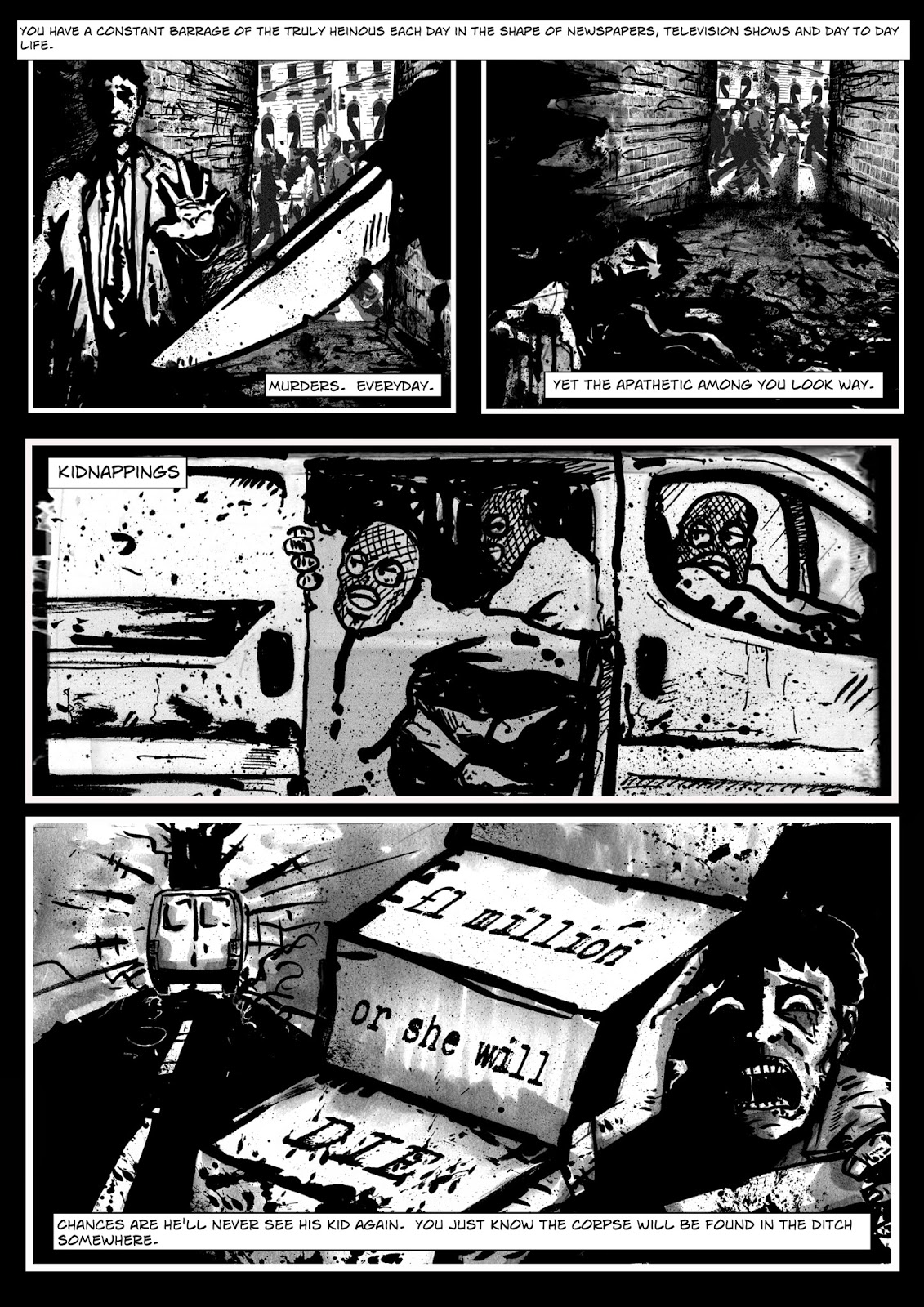 DC: I still pick up any of the Mike Mignola books and I love the Goon. My fave at the moment ,though , is And then Emily was Gone. It ticks all the boxes for me.

PS: I'm a massive Whovian so I'm really impressed with the tie in's that Titan Comics are putting out there at the moment but I recently picked up Battlestar Galactica 1880 as they'd retold the classic story in a steam punk style. Like Dan here, I love my Mignola stuff but I'm reading a hell of a lot of indie stuff at the moment like the Merrick title by Tom Ward and some of the work put out by a Polish artist/writer called Lukasz Kowalczuk too.

SJ: And Then Emily Was Gone is a special book that seems to have come from nowhere; we've got its writer John Lees on later.

DC: It's just amazing. The art, the story, everything. It reminds me of some of the early work from Heavy Metal magazine( or Metal Hurlant ). That introduced me to some great European art.  It's great to see a title like that really take off.

PS: I agree with Dan that when a title like Emily hits and people take notice of something new that it gives titles like Flesh Tones more chance to get out there and seen. 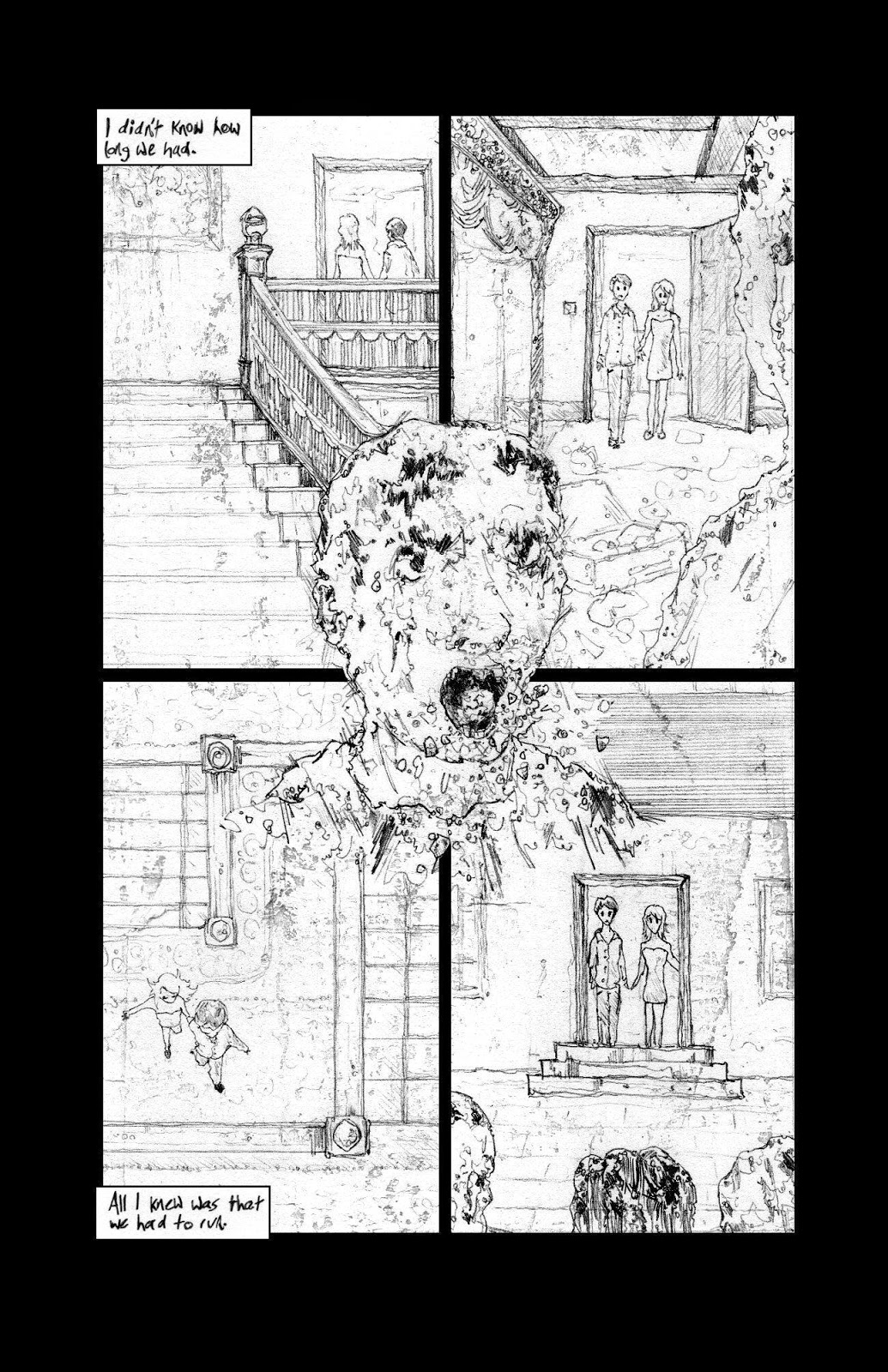 SJ: We'll come back to that later, though, let's get back to Flesh Tones...Is it a one-shot? Where can people get it?

DC: Over to you Pat.

PS: One of the things I think of while working on my titles such as Flesh Tones, which is available now from Sellfy (here) and Drive Thru Comics (here) hint hint, but I'm also working on a zombie series called The Meek with Carlos Moreno as well as a graphic novel that the horror actor called Bill Oberst Jr. is involved with called Freak Show: The Ballad of Cassandra, also with Carlos Moreno. However I feel I've been able to have the most freedom writing wise with Flesh Tones as I can give even the slightest instruction to Dan and his mind is even more screwed horror wise than mine and he can normally nail what I'm trying to explain.

PS: A man after my own heart. Those as well as the 80's 'video nasties' helped me.

PS: I'm hoping that some of those influences are going to be seen in both this issue of Flesh Tones and future ones too.

SJ: Will there be more Flesh Tones?

PS: Oh most definitely.  It's going to be a varied title in that one issue may have a couple of shorter stories, one might have a longer one. I want it to be as varied and creepy as possible and that's where Mr Charnley over there comes in.

DC: I'm peeling my skin as we speak. Slice by slice.

Pat just keeps rolling the ideas out that just click for me. They give me the chance to try some really great artistic experiments.

PS: I'm also hoping that for issue two, the hardest working lady in horror, Maria Olsen, will let us use her likeness like we have with Bill, in a story I have lined up for issue two for Flesh Tones.

SJ: There's a book trailed at the end of it, as well?

PS: There is yes. One of the promo bits at the end of Flesh Tones Issue One is for the zombie series The Meek, drawn by Carlos Moreno and coming out soon. Another is a project that myself and Moreno are working on with the horror legend that is Bill Oberst Jr. 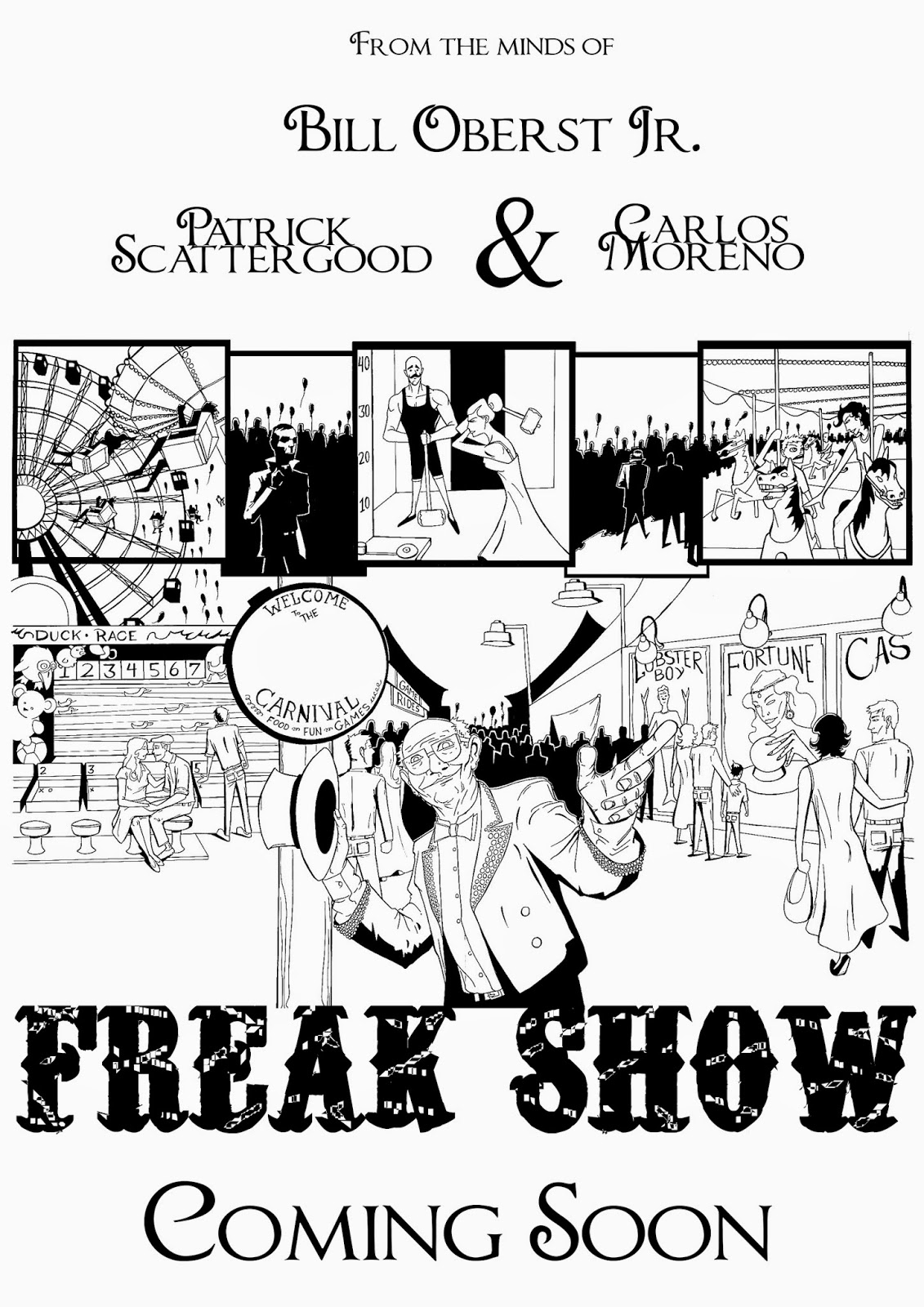 SJ: And Flesh Tones is currently only available digitally, will it be out in print?

PS: Most definitely. It will be getting sent to the printers in the next week or so, and we'll be debuting it at the Nottingham Convention as well as Dan here taking some to the Preston Con.

SJ: Well we're gonna wrap up shortly so anything else you wanna mention before we call time?

PS: Definitely. It's been an honor to be able to talk about Flesh Tones here which is available from the Dark Pond Creations Store and over at Drive Thru Comics too. But also keep an eye on the Dark Pond Creations Facebook Page for news of more of our titles as well as checking out Dan's work over at his Monster Bomb: The Art of Dan Charnley that is well worth a visit.

SJ: Almost out of time, anything to add, Dan?

DC: Thanks for the opportunity Sam, watch out for more, we have such horrors to show you!!

PS: Thank you very much. See you guys at the con and buy our books because let's face it, who doesn't love a good scare?

SJ: Cheers guys, all the best with your books. 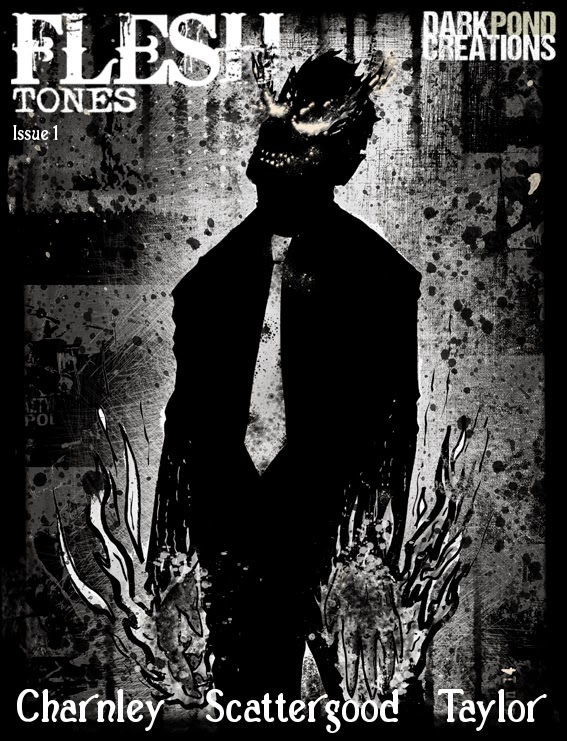 Dan Charnley and Patrick Scattergood are also making an appearance at the Nottingham Comic Convention on October 4th, debuting print versions of The Meek Issue 1 and Flesh Tones Issue 1 so come over and say hi!

Join the Comicbook Facebook group for all your comic book needs!

Sam Johnson for hosting the interview in his group.

Ashley Scattergood for her design work not only on the Flesh Tones cover but also for designing the Dark Pond Creations logo.  She can be contacted on @BabyBearRoar for graphic design work / commissions.
Posted by Pat Scattergood at 11:39