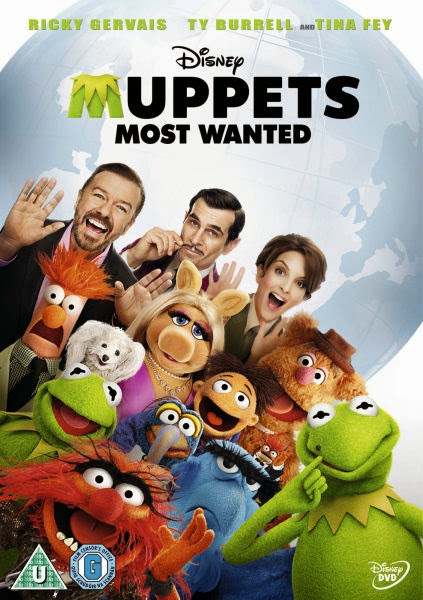 Based On Characters Created By
Jim Henson

There's plenty of fun for the whole family as Kermit the Frog, Miss Piggy, Animal and the entire Muppets gang head out on a world tour. But mayhem follows the Muppets, as they find themselves unwittingly entangled in an international crime caper. Now Kermit is behind bars at the mercy of prison warden Nadya (Tina Fey), and the World's Number One Criminal, Constantine-a dead ringer for Kermit-has taken his place.

As Constantine and his dastardly sidekick Dominic (Ricky Gervais) plot the robbery of the century, they are pursued by Sam Eagle and Interpol agent Jean Pierre Napoleon (Ty Burrell). Will Constantine get away with his nefarious scheme? Will Kermit escape in time to save the day?

Disney's Muppets Most Wanted is the most hilarious, most wanted Muppet movie ever!


When Jason Segel tried his hand at bringing The Muppets back to their former glory, the result was a largely successful and incredibly popular movie that pleased the old time fans but also brought loads more fans in to their midst.

However, when they revealed that the sequel would have none of the original cast returning, I was worried that the charm and fun of the movie would be lost.

That's when I sat down to watch this one with my Muppet mad son.

Instead of watching a charming, funny and high spirited movie, we got a rather mean spirited movie that not only didn't have the sense of enjoyment that the Segel movie had but also didn't feel at all like a Muppet movie.

For the most part, the movie just wasn't funny or even fun.  The scenes really began to grate on my nerves and even bore me throughout the movie.  Even my five year old son had trouble finding something funny in the movie itself and he still laughs at his own farts.

Some of the blame has definitely got to be down to the writing and the direction of the movie itself.  The jokes seemed to be grasping at pretty much anything to get a laugh from the audience.  I'm not one of those fans that want all of the Muppets movies to be the same, old fashioned style that the originals were.  Those were definitely a product of their time but that's kind of what makes them endearing.  The same could be said for the Segel movie.  That had an old fashioned charm to it but still felt modern and fresh.  Muppets Most Wanted completely missed the mark.

Cast wise, the movie is mostly miss rather than hit.  For me, the other part that really stuck with me was the massively stereotypical character of Jean Pierre Napoleon played by Ty Burrell.  While the character seemed to be too old fashioned with it's humour in the movie, Burrell really made the character his own and looked to be having a hell of a lot of fun with it.  Some of the other cast just seemed to be bored or even just going through the motions.  That's a real shame because when cast correctly, a Muppet movie can be a ot of madcap fun and the cameo's are part of that.  Don't get me wrong, some of the cameo appearances did make me laugh, especially with the running Celine Dion joke that went throughout the movie, but for the most part, they just didn't hit the same mark as other Muppets movies.

All in all, this was a very disappointing movie and one that I feel is a big misstep for the newly resurrected Muppets and that's a real shame, especially after the Segel led movie.

Posted by Pat Scattergood at 09:31