A Cat in Paris Review 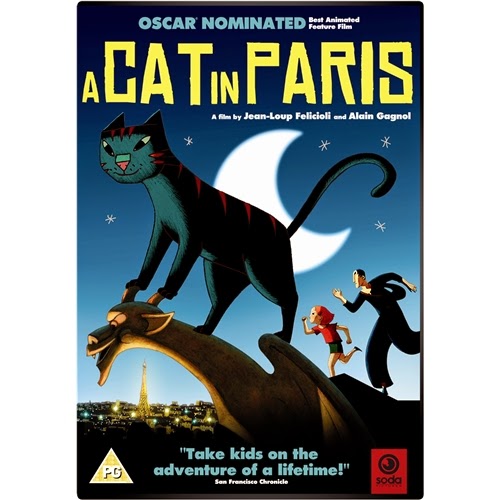 
Nominated for an Academy Award for Best Animation in 2012, A Cat in Paris is a delightful jazzy noir animation that will appeal to children and adults in equal measure.

Dino is a cool cat. By day, he lives with a little girl called Zoe, whose mother is a police officer. By night, he works with Nico, a jewellery thief with a big heart. When Dino gives Zoe a present of a diamond bracelet it's not long before the police are trying to track down the thief. Trying to protect Dino, Zoe follows him and unwittingly stumbles on a team of gangsters who have a big robbery in mind. Zoe finds herself in danger and it's up to Dino and Nico to try and save her.


I love French movies, especially animated French movies.  They also seem to have a different style all of their own filled with whimsy and wonder that just seems so different to other animated movies.

A Cat in Paris is no different to any of those but utterly unique at the same time.

The animation is deliberately crudely drawn in places yet strangely beguiling and beautiful at the same time.  With the animation here more than nodding towards the old classic detective movies that I know and love, I must admit that I absolutely loved all the little hints and sometimes even little spoofs of those.

With the unique animation, one of the things that stood out the most for me was the cat, Nico.  The movements seemed so graceful and full of poise when compared to the human characters.  It really gave the movie a different feel and making the cat one of the main things to watch out for in the movie by animating in a more graceful style really made the movie one that I couldn't take my eyes off of.

There's a real emotion to the movie as well, specifically with the bereaved Jeanne's battles with nightmares of Costa really made my lip quiver a couple of times.  The sheer amount of emotion they put forward in her feelings towards the character that cost her husband his life is superb and handled in such a subtle way that it really touched my heart.

At the heart of the movie there appear to be two stories running alongside each other.  One is that of a young girl with a workaholic mother and the other is that of a burglar.  When you see how these two are linked, it really shows a Gallic flair because when they do come together, it really hooks you in.

One thing I would say is that despite it being rated at a PG, there are a couple of quite frightening moments, especially near the end, that would scare the little ones so I wouldn't recommend it to smaller children.

All in all, this is definitely a movie that I would recommend.  It's gorgeous, exciting and has a nice vein of emotion running throughout the story and that's something you don't seem very often in the animated movies of today.