Why I Cosplay: A Guest Blog From Lion Pride Cosplay 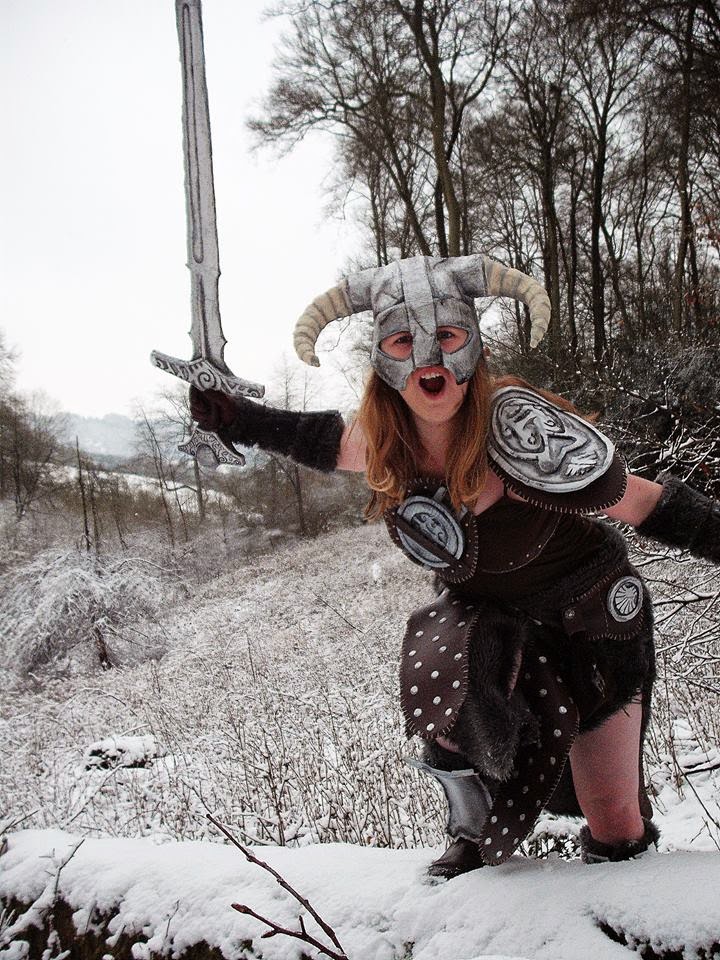 When I sat down to write this blog about cosplay, I had no idea where to start. Cosplay is just such a large subject and has become such a passion for me that I can’t really narrow it down. Anyway, let me introduce myself properly, I’m Rebecca of Lion Pride Cosplay. I first dipped my toe into the world of cosplay in 2012 when I went to my first convention and I’ve fallen in love with it! Two years and three costumes later I’m here, just passed 1,000 followers and being asked to write blogs and give interviews. I honestly can’t believe that so many people are following me for a hobby, but I won’t lie, I love the attention and I get a lot of inspiration from the kind comments from my followers.

There are many things I love about the cosplay community, and I think my favourite has definitely got to be the comradery of its members. It never fails to make me happy to see people talking to each other about their costumes, complimenting each other, asking for ideas, sharing tips and arranging meet ups. Everyone is always so willing to share knowledge and experiences and it just makes it a really nice place to be.
I’ve learnt an awful lot from cosplay like make up and foam latex prosthetics. I’ve also been able to improve skills I already had like sewing, and build on that by learning techniques like sewing leather and fake fur (which is harder than it should be at times!) I’ve gained so many friends through cosplay groups, photographers and even introducing a few university friends to it by helping them with costumes to create our own Batman villains group, which proved quite popular at LFCC just gone. 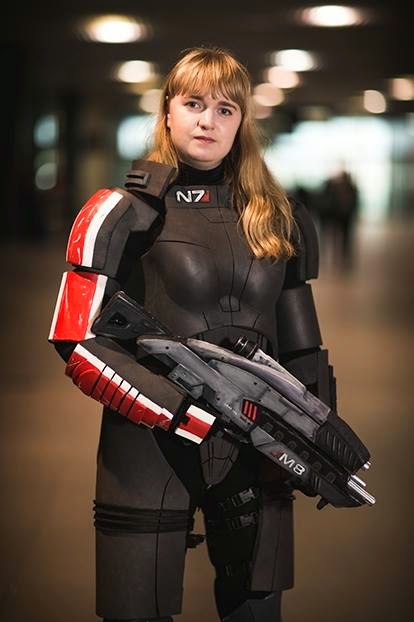 Now I was asked to write about some of my favourite memories but it’s just so hard to pick a few. Every convention I go to and every costume I wear has something amazing or hilarious happen! From photos of me in my full N7 armour reading a newspaper on a train or holding a Sean the Sheep teddy hostage as Harley Quinn, there’s always something fun happening. I still think one of my favourite memories was walking around at MCM in October 2013 when I was debuting Dovahkiin when I had a troop of people follow me and start to sing the Skyrim theme tune so I had some “epic music to go with the epic costume”. Or when I got off the train at my first ever convention in cosplay and someone just yelled “Oh my God look! It’s Commander Shepard!”. Recently I however I had something happen that I think tops them all. One of my fans bought a signed print but asked it to be addressed to his two sons who had a photo with me at LFCC, so that they could get something in the post. He sent me a photo of the boys holding up the picture and looking so happy, as if the real Harley Quinn had sent it to them. It’s moments like these that make cosplay so fun for me. Professional photo shoots are fun and the results are amazing, and making the costumes themselves are challenging and rewarding, but for me it’s the memories that cosplay has given me that makes it all worthwhile.

I just love being able to think that by day I’m a zoology student, but come the weekends I’m running around in a set of armour for an event somewhere. There’s nothing more fulfilling than having people compliment me on what I’ve made, and everyone who stops me for a photograph makes me feel appreciated. I absolutely love the hype running up to a convention, knowing that for the first time in months I get to don another costume and not be me for a day or two. I also love that it’s something myself and my boyfriend can do together. We make a really good team as he can look at a character and work out how to make things, and then hands over to me where I can get creative with the design ideas he gives me for our costumes. He’s the creative thinker, I’m the creative doer and I think it’s resulted in better costumes than if we went about things on our own. It’s such a great way to spend a day; stick a film on while he paints my Harley Quinn vest to give me a hand, and I paint metallic details onto his pistol prop for his TwoFace costume. 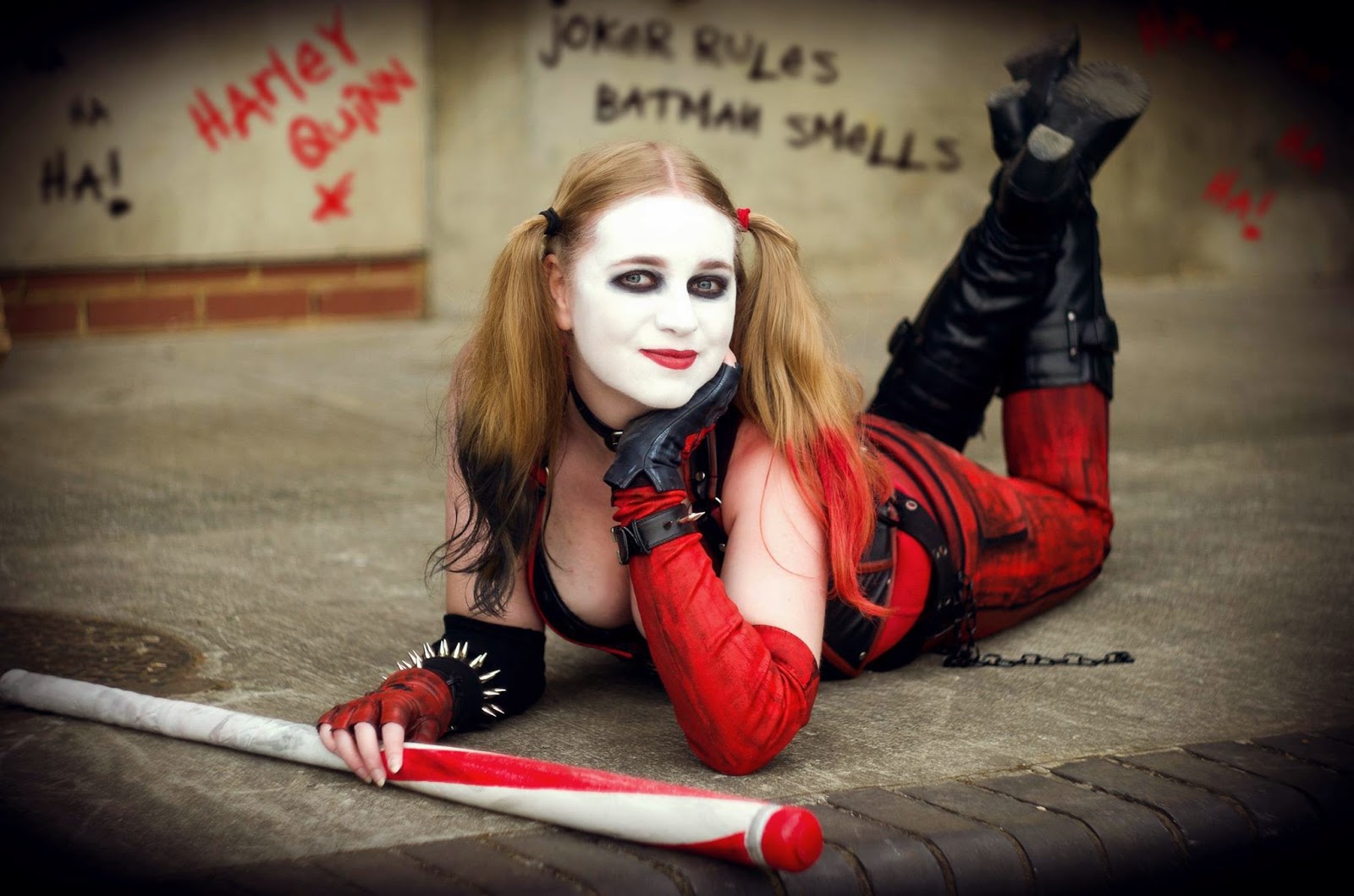 Cosplay has also helped me in other ways as well. Since about this time last year I developed depression which is still hard for me to manage at times, but being able to just not be me for a weekend can give me the breaks I need. It may sound silly to someone who doesn’t dress up, but when I put on that Skyrim armour I feel like the Dragonborn. It gives me confidence and strength. Almost all my social insecurities and anxieties go completely out of the window when I’m being a character, and it feels amazing. Also know that I can launch myself into a costume project, it’s such a great distraction for everyday life, I would honestly recommend for everyone as a way to have a break.

If there is anything I would say it’s if you’re thinking about starting cosplay, do it! It’s so much fun, the people in the culture are just so lovely and you get such a kick out of it. Even if you don’t make a costume, just going to a convention and being the character you’ve always wanted to be is so fulfilling. Cosplay has even given me more confidence about myself; I love pushing myself to make new things that I haven’t made before and the feeling afterwards when it’s complete is so worth it. I have even managed to gain more confidence about myself as a person and my appearance. When I first started back in 2012 I thought I would be making armour sets forever and I would never have the body confidence to do a character like Harley Quinn, but here I am two years later running around conventions with a baseball bat being one of my favourite Batman villains. So get on the internet, look for a costume of that character you’ve always wanted to be, or start looking up fabric patterns or make up tutorials; cosplay is the best kind of hobby anyone can have!

For information, competitions and much more, follow the Lion Pride Cosplay page!
Posted by Pat Scattergood at 11:37