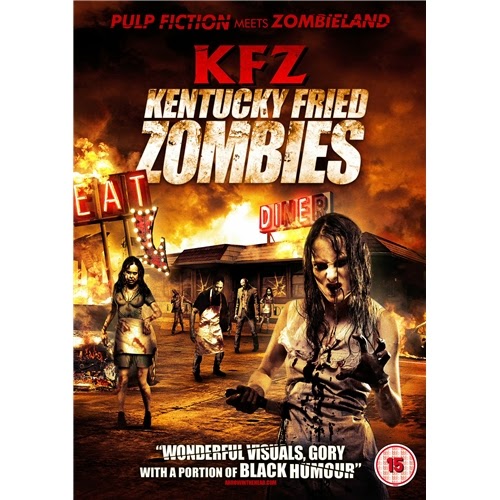 Written and Directed By
Patrick Horvath

A Shot in the Dark Film


When an irreverent serial killer stops into a remote diner, the graveyard shift gets a meal to die for - literally!

Shortly after Ken makes the waitress and the cook his latest victims, the local sheriff and a bickering young couple stop in for a late snack, and to everyone's surprise, so do the un-dead neighbors, back for revenge!


As a fan of low budget horror and especially as a fan of the legendary Maria Olsen, I was very eager to finally manage to get my hands on this one and get to see some zombie goodness.

When you come in to a movie with a movie such as Kentucky Fried Zombies, or in the case of the American release, Die-ner (Get It?) you know exactly what to expect and that is to not take this at all seriously.  In fact, I would say this movie works best as an extremely dark comedy and that's how I went in to watching it.

As an ultra low budget comedy horror, this movie works very well.  A couple of the performances are a little stiff but, and let's be honest here, we have all seen a lot worse in these sorts of movies.

One of the performances that works the best for me was definitely Joshua Grote.  He looks and sounds like a younger and definitely more cynical / sarcastic version of Edward Norton.  A lot of the dark humor comes from the deadpan way he delivers his lines and that really had me laughing and smirking a lot during the movie.  I also liked the fact that instead of being terrified of the zombies upraising around him, he was more interested in the idea of them coming back from the dead after he had murdered them in the beginning of the movie.

If you are gore hound, you might feel a little short changed by the lack of gore but to dismiss it as not worth watching because of that would be a real shame.  I do love my gore in my horror movies but the grainy and gritty feel of the movie worked better without it.  The feel of the movie had a bit of an old eighties horror to it and I loved that slightly nostalgic take on a well worn genre.  They even managed to do the old chestnut of "kill me if I turn" line without it come across as groan worthy.

One of the things that did bug me were a couple of the editing moments made a couple of scenes feel like they had skipped ahead.  I even rewound it once because I thought that I had leaned on the remote.  That's worse on the 'duct tape' scene where the screen appears to go black as soon as the last syllable has come out of the characters mouth and then all of a sudden we're back in the scene a little bit forward in time.  I know they couldn't have shown him getting taped up, because that would have taken a lot of time, but the editing just felt a little messy on that part.

All in all, this low budget horror comedy is a gem.  I really enjoyed the bitter and sometimes cynical take on the zombie genre and will definitely be watching it again.  Just ignore the DVD cover because I have no idea where on Earth the explosions on there came from because they sure weren't from this movie.

Posted by Pat Scattergood at 12:21