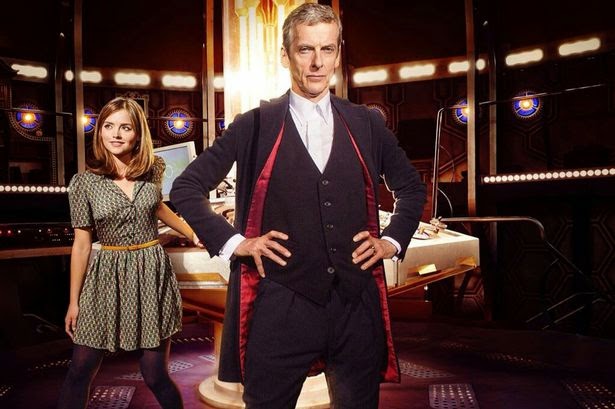 
When the doctor arrives in Victorian London he finds a dinosaur rampant in the Thames and a spate of deadly spontaneous combustions.


I was lucky enough to get hold of tickets to the cinema screen of the premiere episode of the eighth season of the regenerated version of the long running science fiction show.

Much has been made of the casting of Peter Capaldi as the replacement to the Matt Smith version of The Doctor.  We were promised a completely different Doctor to the one that Smith portrayed but just how different would Capaldi be?

Well, while we ended the episode with quite a few more questions than we started with, we also were given a glimpse in to what the Capaldi era could hold for us Whovians.

One of the things I liked the most was the fact that Capaldi was playing the regenerated Doctor superbly well, flitting in between madness and clarity.  This was done in a poignant way, especially in some of the scenes with Clara and then with a tramp, played by Brian Miller, where he wonders just who he is and why he has the face he has now.  This is also taken in such a way that it really tackles the relationship between the Doctor and Clara in a heartfelt way.  It almost felt like they were tackling some of the prejudices that some of the younger viewers may have against Capaldi's age and appearance.

Another great touch was the talk between the massively creepy Half-Face Man, played by Peter Ferdinando with great style and creepiness, and The Doctor.  You are left wondering just what happened between the two of them and Capaldi's performance really lent itself well to that.  This then led in to an interesting ending with a new character named Missy.  I get the feeling that she is going to be a very big part of this series and I'm really looking forward to seeing just how she will fit in to the larger Dr Who puzzle.

However, my favorite part of the episode was easily the reappearance of Strax, Vastra and Jenny, easily three of my favorite characters in the Dr Who world.  It was great to see some new layers to the three characters too, especially with some of the more comedic moments between Strax and Clara but that also lent itself superbly well to exploring her feelings about the new incarnation, especially in some of the back and forth scenes between herself and Vastra.

All in all, I think this was a great start to the Capaldi era.  We got a glimpse of the kind of the Doctor he is going to be, some returning characters as well as a couple of new ones, a very heartfelt ending involving a phone call from a past character as well as a role for Brian Miller, the husband of the late Elisabeth Sladen.  If this is just the start of Capaldi's run then I can't wait for the second episode.