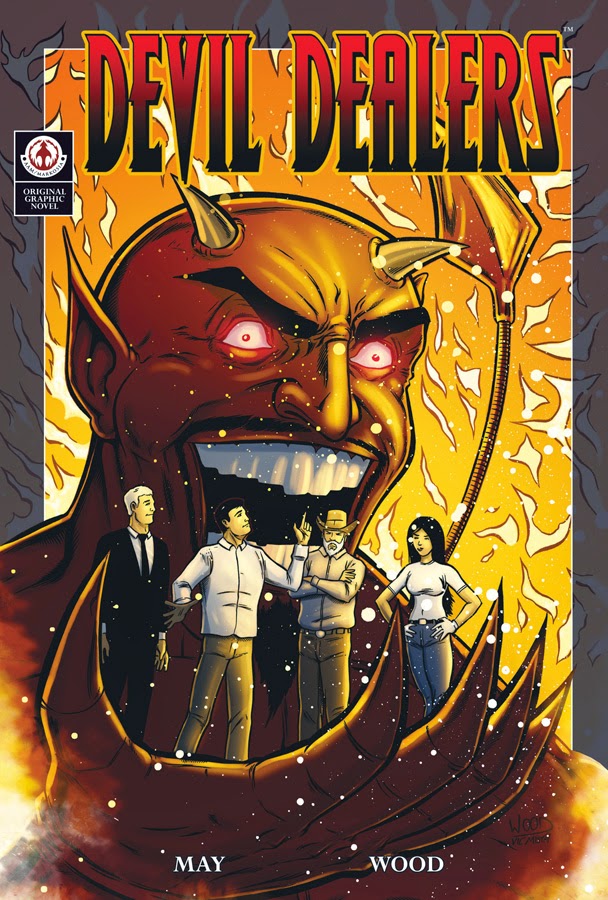 Written By
Ross May


The world's greatest card shark. A woman outracing the Devil. A fiddler who'll make the sun come up. A chess player with a master plan. And a bluesman who can bring anyone to tears. They're the best at what they do, and they're going to show the Devil how things are done.


The idea of someone making a deal with the devil has always been a storyline that I have been interested in for various reasons.  Why would they make a deal, what would they deal for and much more besides.  Over the years we've had a great many movies, books and comics that have gone that route.  Some have been brilliant, some forgettable and others have been downright awful.

When I was given the chance to review this, the new release written by Ross May, I was very excited to see where he would take this new version of the oft written tale.

Well, the answer to that is a simple one.  He takes it in many different directions and most definitely keeps the readers on their toes with the sheer amount of twists and turns here.

With so many stories running alongside one another you would expect a little bit of a disjointed story but that's not really the case here.  The subtle pacing at the beginning helps with that by taking a little bit of time to get going.  That isn't a bad  thing because it gives the readers time to get to grips with the characters and their quirks.  This was a nice pleasant surprise from some of the other releases I've read recently where they jump straight in to the story and  that leaves you with flat characters.  There were a couple of moments where there seemed to be a couple of minor plot holes but for the most part, this is an extremely well written and interesting take on the idea of making a deal with the devil.

Art wise, it was the bright colors used by Kirsty Swan that really caught my eye.  That combined with the art and ink by the team of Brett Wood, Victor Moya and Ayela Moya really make this a release from Markosia to keep an eye on.  It really is a feast for the eyes and completely brings the story and characters to life in a big way.

All in all, this is a very good release from Markosia and really shows just how strong their releases have been recently.  The sly and witty pop culture references are well done without being over the top or annoying and the story itself really takes a good stab at making an often used storyline feel new.  Definitely one worth picking up.