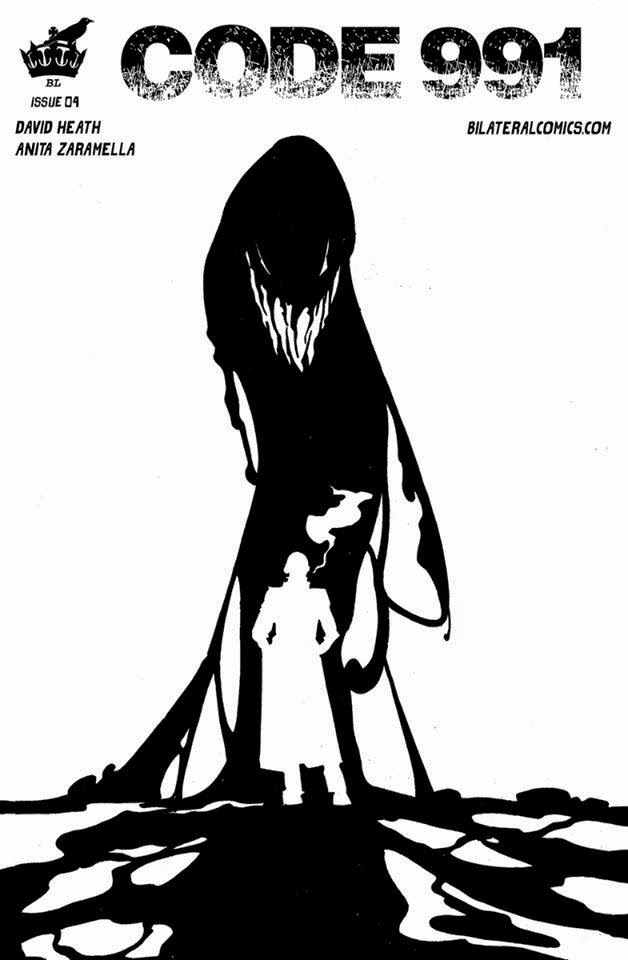 
Detective Jeff Millet is a bitter, cynical detective on his beat.  Resigned to the fact that it will be a normal night of murder, death and crime, he pounds the streets but this would be the night that everything changes.


Bilateral Comics, helmed by the writer David Heath, have slowly been gaining a reputation for putting quality stories out there but in a mixture of genres.

Code 991 is their newest offering and I'm going to be honest here.  It absolutely blows their previous releases out of the water.

The idea of a bitter and cynical detective pounding the streets and lamenting his life may not be a new one to comic book fans but the way David Heath has handled it has made it his own.  The character of Jeff Millet is used to not only further the story but also gives a great commentary on how the world has been becoming recently.  Millet's voice comes across as someone that just wants a quiet life for himself and for the human race to stop doing messed up things to one another.  That's not too much to ask right?  I'm sure we've all felt like that before,

The story really progresses with a subtle yet quick pace.  It's rather hard to marry the two without the story being disjointed but Code 991 doesn't have that problem, instead packing in a lot in to it's 19 pages.  With Millet being the voice of reason during the story, the proceeding tale really packs an emotional punch and came across as a bit of a mix of an old Humphrey Bogart movie and even has hints of Blade Runner while maintaining it's own voice.

With the art being handled by the supremely talented Anita Zaramella, the story of Detective Jeff Millet is given a hard edged, dark and gritty feel without feeling too in your face with it's influences.  The line work and panel placement really marries with the pacing of the writing superbly and had me completely hooked all the way through.  The thing that struck me the most was Zaramella's masterful use of shadows to tell the story.

If you are looking for a quality science fiction story but with a classic film noir slant then this is definitely the story for you and is the best to come out of the Bilateral Comics stable by far.


For more information on their forthcoming titles you can follow their Facebook page!
Posted by Pat Scattergood at 12:08