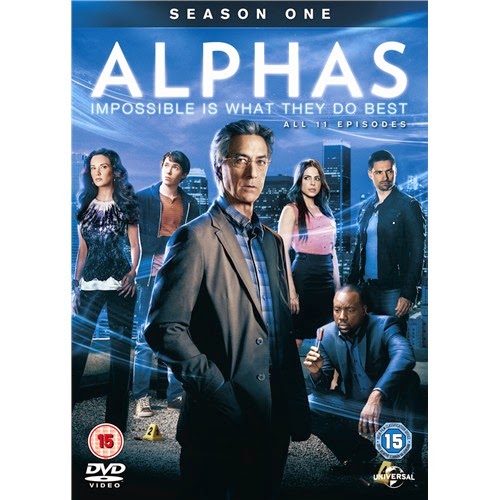 
Noted neurologist and psychologist Dr. Lee Rosen (David Strathairn) heads up a government sponsored team that includes Cameron (Warren Christie), a former Marine with the superhuman ability of 'hyperkinesis'; Rachel (Azita Ghanizada), a former CIA linguist with the ability to 'heighten' one of her five senses; and Gary (Ryan Cartwright), who through 'technopathy' can interact with wireless communication signals and process information as fast as any computer.


There was a lot of hype amongst my comic friends about this series when it came out but sadly, I never got the chance to catch it while it was being shown on television before it went the way of most television series' these days and got cancelled but was that a fair decision?

Well, from what I have seen after watching season one on Netflix, I would have to say no.

I have to admit that at first, the series didn't really grab me.  The first couple of episodes were good but just didn't seem to hook me in as much as I was expecting them to but the third episode is where the series started to come together.  We got to see a little bit more of the characters and, in much the way as they do in the series itself, the different people involved seemed to mesh better.

After the teething problems in the first couple of episodes, the action really started to hot up.  That's when we started to get a bit of a glimpse of the conspiracy that is surrounding the various types of 'Alpha' that have appeared.  The series' use and way of showing the different powers and abilities was extremely well done and made me really want to get under the skin of the people that those skills belonged to.

The stories themselves all worked fairly well as standalone stories but at the same time rewarded the fans that stuck through the first season, culminated in an exciting ending.

The one thing that did bother me was the simple fact that there were a couple of stories where there seemed to be characters that didn't really do anything.  That was most true of Rachel a couple of times.  I think her power is incredibly interesting but seemed a little underused for the most part but hopefully that will change in the second, and last, season.

There were some great guest appearances, with more to apparently come in the second season, including Summer Glau (Firefly / Serenity), Callum Keith Rennie (Battlestar Galactica / Californication) and more but the series for me definitely belongs to Ryan Cartwright, who as Gary Bell really does an amazing job of bring the character to life with humor and gentleness.

All in all, while not as gripping as I had hoped, the first season really did pick up steam after a couple of episodes and built up really well to an ending that has made me want to jump straight in to the second season.