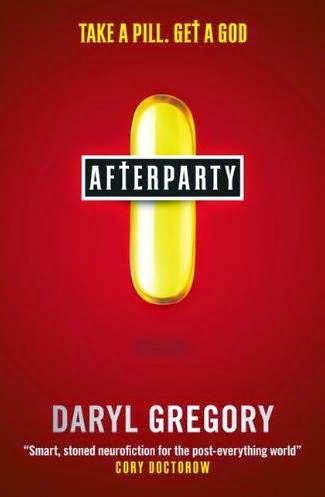 ‘Numinous’ opens up a portal to God – or, at least, a convincing illusion of one. In a world where God is a drug, one woman has to get sober. Lyda Rose was one of the four neuroscientists who helped create Numinous, a breakthrough drug intended to treat schizophrenia.

Since unwittingly overdosing on the drug, Lyda has been haunted by visions of an angel she calls Dr. Gloria. Treated in an asylum, Lyda has to remind herself that the doctor is merely a drug- induced manifestation of her own temporal lobe, but the angel is awfully hard to argue with.

Afterparty follows Lyda’s investigation into a series of Numinous-like overdoses. It is also about the ways that our brains can fool us, often for our own benefit.

Along the way the book asks twenty-first century questions: If personality, sexual orientation, religious belief, and morality can be chemically twisted, what is the self? Does free will exist? And is sin even possible?


Knowing his work with Boom! Comics, I was very eager to read this new book from Daryl Gregory.  I mean, look at the synopsis.  To me, the idea behind the story sounded utterly incredible, unique and exciting so did it live up to the promise?

On paper, this sounded like it would be a slam dunk of a novel.  A science fiction thriller with a message but for me, something felt like it was missing.  The idea behind the story sounded like a gritty and cynical take on what would happen if there was a drug that could pretty much control everything a human can do but it just didn't take off.  Some of the blame for that comes from the little niggling inconsistencies in the plot.  Why have drug dealers when normal people can just print off any drugs they need?  That was the one that bugged me the most, which admittedly is a minor flaw, but there were so many ideas that just seemed to pop up one minute and then be forgotten the next.

Another thing that bugged me was the simple hit and miss nature of the characters.  Lyda is a superb character as is the angel that seems to follow her around everywhere.  It's her story that is by far the most interesting in the novel but the other parts that run alongside it just don't really match up all that well in terms of being interesting.  That's a real shame because it's the Lyda part that really brings home the idea of having a drug that can bring someone closer to God to the forefront and makes the reader ask some soul searching questions.

With a couple of plot holes and some quite unlikeable characters, I must admit that I found it hard to keep going with the novel itself.  I would even say that there were a couple of moments where I didn't want to finished the book but I carried on and was rewarded with some of the best parts.

While a bit of a disappointing book considering the author, if you can keep with the book itself then the best parts do start coming about halfway through.