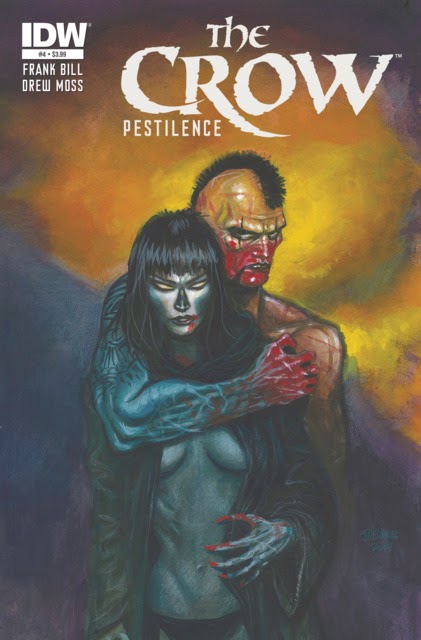 
The Crow helped Salvador rise from the dead to avenge the murder of his family by a brutal gang, but the guilt he feels for his involvement in their deaths still lingers, even as he hunts down those responsible.

The gang, aided by a supernatural entity called Santa Muerte, are able to capture Salvador when his body is weakened by their joint attack...and The Crow is also wounded.

Will Salvador be able to finish his quest for vengeance, or does his path stop here?


As a massive fan of The Crow, I must admit that the Pestilence series has been incredibly hit and miss.  There have been some promising ideas there and some very good moments as well so it's ended up feeling a little uneven.  That was most evident in the third issue, which felt poor until an ending that made me want to pick up issue four.

After reading this one, the conclusion to the Pestilence series, the same problems that plagued the other issues are still here, albeit it to a slightly lesser extent.

My main problem with this final issue is that it should be the sort of issue that ends the series with a bang yet it ends up being more of a whimper.  There's a feeling that the action and the story is leading to something big, that it is leading to a massive ending.  Sadly, that's not really the ending we got here.  It did feel that there was something big on the way but it never came.  Instead it ended and left me, as a fan, thinking "is that it?" and that's not really the reaction that the writer probably wanted.

The main result of that is the simple fact that despite building up the supernatural elements of Santa Muerte, it never seemed to go anywhere and that's a real shame because it was the most interesting part of the story for me.

Frank Bill's writing here just never really seemed to get the traction needed to make this in to a truly memorable story worthy of being under the banner of The Crow.  That's a real shame because his writing is normally really gripping and exciting but here it just seemed a little bit hit and miss, which seems to be a term that I am using a lot to describe this series doesn't it?

The art by Drew Moss and Oliver Lee Arce suffered the same fate as the writing throughout the series.  One moment it would really draw the eyes to the action and to the panels but then it would end up looking unfinished or even rushed, which would really take me out of the story.  The seeds are all there for the art to absolutely go nuts and really make this fly off of the page but like the writing, it never seemed to really get any momentum going.

All in all, after an interesting start, this series really seemed to just fizzle out instead of ending with a bang.  The ideas were all in place and the storyline sounded interesting but sometimes, just like in the real world, ideas that may sound good in theory just don't translate on to paper very well and that's what I feel happened here.  Shame really considering the talent involved.