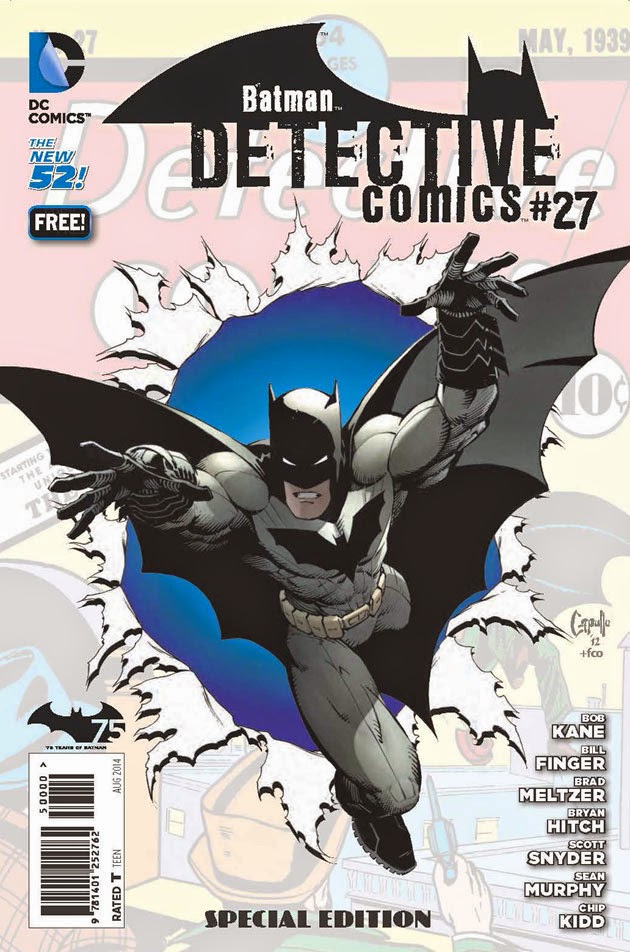 
In his 75 years, Batman has been the central figure at the forefront of graphic storytelling. From the printed page to the big screen, Bob Kane's creation has never been a more significant fixture in popular culture the world over.

This BATMAN 75 DAY COMIC 2014, free for a limited time, features the Dark Knight's origin from DETECTIVE COMICS #27 in 1939, as well a retelling of the story by New York Times bestselling novelist Brad Meltzer and illustrator Bryan Hitch and another short story by current BATMAN scribe Scott Snyder and artist Sean Murphy.

Also included is a sneak peak at the reimagining of Batman's 1939 comic book debut, designed by Chip Kidd with a script by Meltzer. Join us as we celebrate the Dark Knight's 75th anniversary.


As a comic book fan that leans more towards the small press and the indie label side of things, I don't really review a whole load of titles from DC or Marvel but sometimes there's an event that interests me to the point that I will give it a go.

With it having him the 75 anniversary of his creation, DC decided to put out a special free comic book to celebrate the longevity of Bruce Wayne's heroic persona.  In the comic we have the original story that introduced the world to the Dark Knight as well as a modern retelling of that classic tale.  We also have a short story set in the future by Scott Snyder and a sneak peek of the reimagining that has been designed by Chip Kidd and written by Brad Meltzer.

For the long term fans, and even some new ones, this one is an absolute treat.  Not only do you get to see the story that started our love affair with the savior of Gotham City but it was also brilliant to see a modern take on it by a writer such as Brad Meltzer and who better to partner him in that undertaking than Bryan Hitch.  Both stories may be the same story on the surface but both are complete polar opposites and that's what I have always liked about the writing side of things.  You can give two people the same story to do and you will nearly always come back with two completely different tales.

The art here is a great collection of the different visions we have had of Batman over the years.  You have Bob Kane, Bryan Hitch and more all give their unique perspectives on him and the issue really does come across as having something for each type of fan.

All in all, especially considering this is free, it's a superb addition to any Batman fans collection and well worth picking up a copy.  The best part for me personally was the simple fact that Bill Finger finally gets a credit for his part in Batman's creation and it's well deserved and about time that happened.