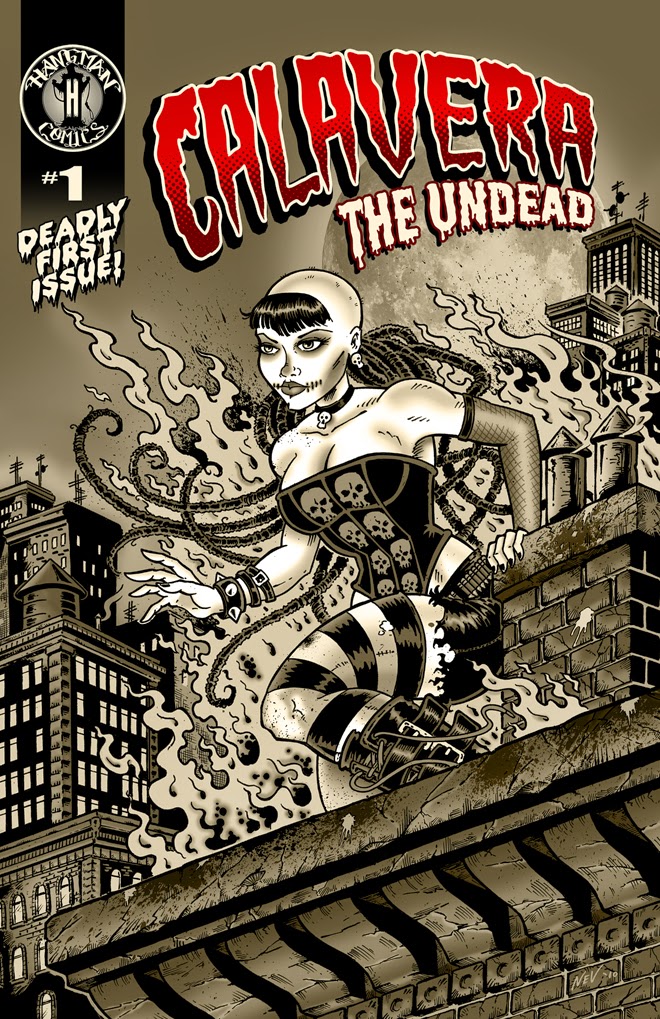 Art and Cover By
Nevin Arnold


Calavera, a fun loving 80's rocker chick, falls to her death in 1989 only to instantaneously awaken in the year 2012.

Now essentially a super powered zombie, deteriorating day by day, and sharing her body with a mysterious entity, this most unlikely heroine may be our last hope as dark forces plot to destroy civilization as we know it!


I'm a big zombie fan.  Doesn't matter if it's books, comics or movies, give me a good story with some flesh eating zombies and I am a very happy horror nerd.

That's where this one comes in.

I'd heard quite a few good things about this one, including some very lofty comparisons with the legendary Tank Girl character.  Could it possibly live up to such lofty expectations?

If, like me, you grew up steadily on a diet of cheesy horror movies and music by bands such as The Cramps and The Misfits, then this is definitely a title for you.

You would think that because of it being a zombie that it would be dour or even nihilistic but there's a real feeling of not only fun and humor but also of excitement running through the comic.  That sense of fun makes this one the sort of comic that you can read but then read again and again.  I love it when you get a title that makes you feel like that.

The comparisons with Tank Girl are pretty fair to be honest but Arnold's writing really makes the character wear it's inspirations on her sleeve yet does so with an utterly unique voice.

One of the things that I liked about the title is by far the art.  It harks back not only to horror comedy movies such as Army of Darkness but also the old comics that inspired such movies as Creepshow and the like.  It takes those influences but points a modern spin on it.  Another thing that I found to be quite clever about the title is that while the main character has a bit of a provocative look to her appearance, whenever a person leers at her she ends up resorting to going a bit bad ass on them and teaching them a lesson.  I thought that was a good jab at the over the top sexuality that is in comics these days.

All in all, this is definitely a good comic to pick up if you just want to read one that has an absurd sense of fun and a slightly off kilter sense of humor to it.