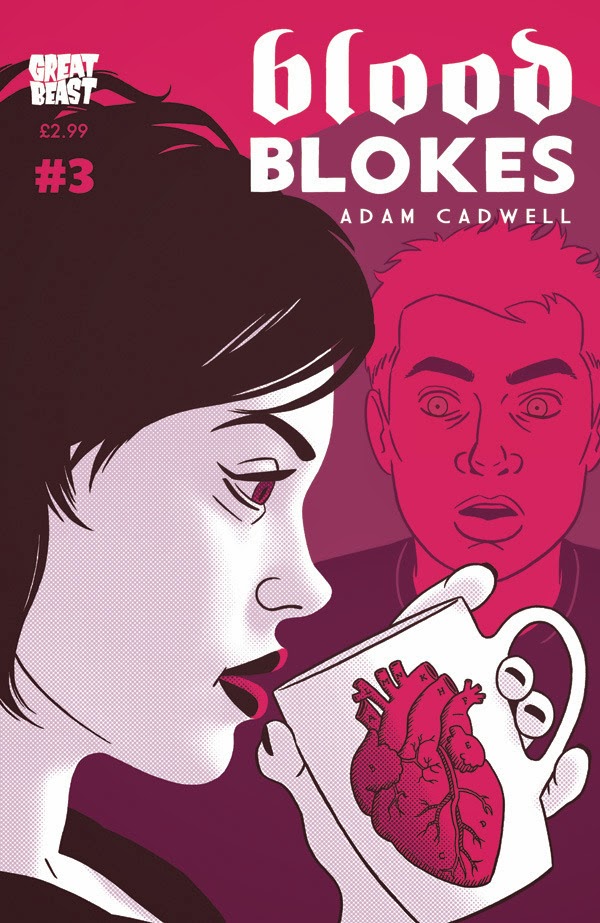 
In this third issue, Vince awakens in the vampire house with more than a few questions. When he discovers the hard way that going home isn't an option he finds the life of a vampire to be alarmingly familiar, yet Vince still longs for a certain someone.

In the fourth issue, Douglas teaches Vince how to hunt for blood from high above the drunken crowds of Oxford Road, while Tamara meets a very inquisitive gentleman among the goths and rockers in Jilly's Rockworld.

With a back cover by Paul Duffield (The Firelight Isle) and back up illustrations by Warwick Johnson-Cadwell (Tank Girl), Andy Bloor and James Lawrence. 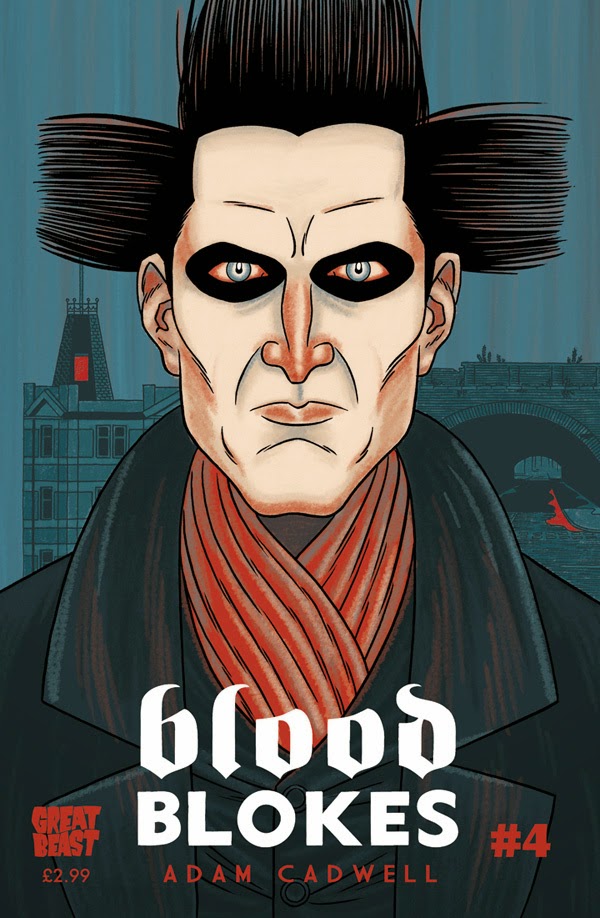 
After the superb first two issues of Blood Blokes I can honestly say that I was wondering just what would make the story go from being very good to brilliant.  Well, these two issues definitely go a long way in to doing that.

Issue 3 starts exactly where the second one left off with Vince waking up in a house with a whole bucket load of questions for his new vampire friends.  The story does a great job here of showing Vince's fear and confusion without it turning in to melodrama or over the top silliness.

The way the vampires try to show Vince the ropes only for him to set in to motion the events for issue four is very well written by Cadwell.  The characters here really do stand out a lot from the current crop of the vampire genre and I have to admit that I really like the fact that they don't fall in to the normal cliches.  Instead they come across as real people that you may have met when out partying in the goth and alternative clubs but they just happen to be the vampires.

That is followed up superbly well in issue four when Vince teams up with Douglas in order to learn just how to hunt for blood and other lessons.  Running alongside this part of the story is one of a new man turning up and trying to discover more about the group.  It's left quite open ended and really left me wanting to see more, to read more about both the group themselves and this new arrival.

As well as these two great issues, we're also treated to some absolutely brilliant guest art by a whole variety of artists ranging from AccentUK's Andy Bloor to Paul Duffield and beyond.  This was a great touch for the fans of the series and if this is going to be an ongoing thing for this title then I honestly can't wait to see who is going to jump on board next.

All in all, this is definitely a vampire series that is well worth picking up.  I mean come on guys.  It's Great Beast Comics.  You know it's a quality title when it has their seal of approval on it.