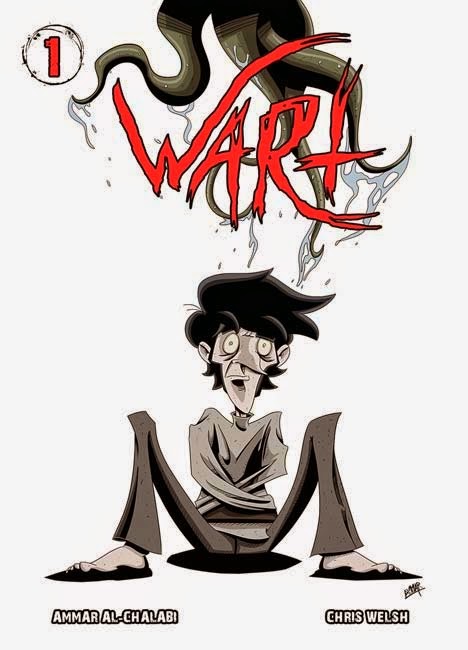 Art and Cover By
Ammar Al-Chalabi


You might think being called 'Wart' is the worst thing that could happen to you, but you'd be wrong.

Being dragged into an alternate dimension by a castle-sized tentacle monster, then thrown in to a dank cell by a mad doctor, all before breakfast, is much, much worse.


Just recently I have been reading a hell of a lot of indie and small press comic books.  Some of that is down to being bored of the 'big two' and some of it is simply down to the fact that I wanted to find something new to read.

After being given the chance to read 'Wart', I wasn't really all that sure of what to expect.  A comedy horror with hints of Lovecraft made me wonder just where the writer and artist were going to be taking this tale of a man being dragged through in to an alternate dimension.

The story itself is absolutely hilarious, exciting and utterly brilliant.  You can see some of the influences on the writer quite easily but he puts them forward in such a way that it feels completely new.  One of the strengths of 'Wart' is the balance of the funny with the horrifying.  In fact, I would even say that they have managed to get it near perfect.

However, it's the art that truly makes the title come alive with passion and vitality.  I was massively impressed with the fact that while funny, the art really had a bit of a dark side to it too.  Through out the story, the art makes subtle little changes here and there, which I absolutely loved.  The slow descent in to the stranger sides of the story really is where the art came alive for me.  The use of shadows, darkness and color is positively sublime in that it mirrors Wart's mindset perfectly.

The creepy feeling of the story is what has made it the most successful for me.  It was nice to see a horror story that had a bit of a classic 1930's Universal horror movie feel to it without them having to resort to the guts and gore approach.  For me, that really made it stand out from the other horror comedies out there and really makes it a title worth picking up.