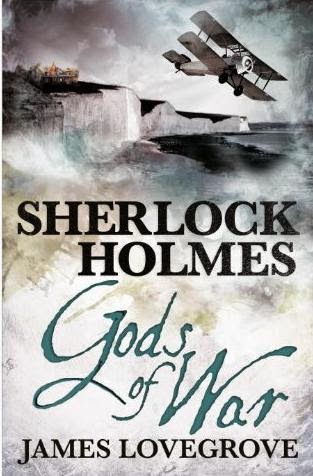 
1913. The clouds of war are gathering. The world’s great empires vie for supremacy. Europe is in turmoil, a powder keg awaiting a spark.

A body is discovered on the shore below Beachy Head, just a mile from Sherlock Holmes’s retirement cottage. The local police are satisfied that it’s a suicide. The victim, a young man, recently suffered a disappointment in love, and Beachy Head is notorious as a place where the desperate and depressed leap to their deaths. Holmes, however, suspects murder. As he and Watson investigate, they uncover a conspiracy with shocking ramifications.

There are some men, it seems, who not only actively welcome the idea of a world war but are seeking divine aid to make war a reality.


I must admit that as big a Sherlock Holmes fan as I am, especially of the books and anthologies that Titan Books have been putting out recently, the previous one by James Lovegrove entitled The Stuff of Nightmares didn't excite me as much as I had hoped.

When this one came through, I was a bit worried that it would go the same route of being good but not gripping and becoming a slight disappointment.  However, when I read the synopsis of the story, I couldn't but get excited.  The idea of murder and conspiracy being investigated by Sherlock Holmes and Dr. Watson really made me wonder where Lovegrove was going to take the incredibly popular characters created by Sir Arthur Conan Doyle.

Throughout reading Gods of War I was struck at the fact that Lovegrove hit a brilliantly subtle pacing yet made it gripping to the point of needing to get to the next page to see where the shocks were going to come next.  Where The Stuff of Nightmares was a little hit and miss in that regard, Gods of War hits the right notes at the right time to get a reaction from the reader.

The fact that at first, seemingly unrelated happenings then all converged in to one case, really impressed me with how well it was written in that it came sometimes be really easy to see where the shocks are going to come but that's not the case here at all.  In fact, I loved the twists and turns set out through the story and at times, I even felt like Holmes was going to be at a loss to work out where the case was going.

Characters wise, it's quite hard to get the relationship between Holmes and Watson right but Lovegrove nailed it head on here.  The little remarks to one another, the little barbed jabs, the working out the case together, it's all here and well done.

All in all, this would have been a great story in the Jeremy Brett era of Sherlock Holmes episodes and I mean that as a big compliment.  Those stories always seemed to go more the more detailed route with the characters and that is what Lovegrove has done here.

I would definitely say that as a Holmes fan, this book is well worth picking up and adding to the collection.  In regards to the rest of the Titan Books Sherlock Holmes books, this is definitely up there with the best of them, especially those by George Mann.