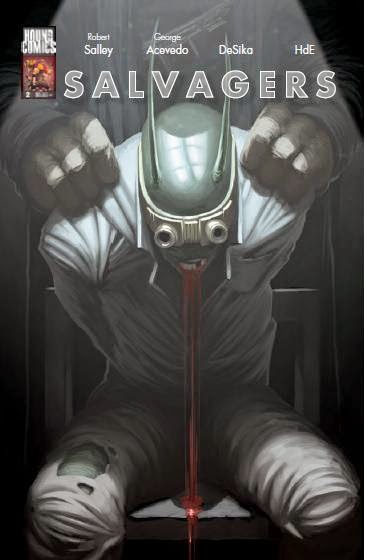 
After our intial introduction to the Crew of the Harrier IV salvage vessel, we take a step back (almost in a Issue 0) to see how, why and what they are doing so far away in the outer rim.


After getting dropped in to the dead end of the action in first issue of Salvagers, Bob Salley has made a brave move and taken us back a little bit in to the story to see how the ball got rolling.  For some series that could stop the momentum gained by a superior first issue and others, it will hook even more readers in.  So where does this shot land?

The strength of the second issue is that it manages to do a strange thing.  The story has taken a step backwards in time yet it doesn't feel like it.  Instead, it just feels like we're riding alongside the various characters and getting to know them instead.

One of the things that I really liked about getting to know them a little more is the simple fact that we see that they're not perfect in any way.  They screw up and make mistakes, especially in poor Brigby's case.  Normally in too many cases,  the heroes in science fiction comics seem to be able to do no wrong and that means there's no tension or sometimes even excitement in the missions but that's not the case here.  Instead Salley has created a world that we are only just dipping a toe in to and reading this issue has just made me want to get further and further in to the story.

Once again, the art and coloring duties are handled by George Acevedo and DeSika and what a truly brilliant job they make of it.  If I'm honest, I think they surpassed the superb art in the first issue in this one and really make the surroundings and ships seem like they're characters in the story and not just settings for the action pieces.  That's most evident in the grime and grit of the city scenes that reminded me a little of a grittier Blade Runner in places.  I was really impressed with the sheer amount of detail that they managed to pack in to the scenes without it feeling over crowded or feeling over the top.  It's the same with the lettering by HdE.  A good letterer will work so that while the work is noticed and helps the scene, it doesn't over shadow it and that's exactly what HdE has done here.  In fact, the lettering work here is brilliant and really adds to the feel of the story and you can't ask for more than that.

I have to admit I wasn't sure where the story was going to go after the first issue.  I honestly didn't expect it to be an issue with back stories for the characters, which I must admit was a risky move but it works superbly well.  I will definitely be jumping on board with the Salvagers for a third mission and you should too.