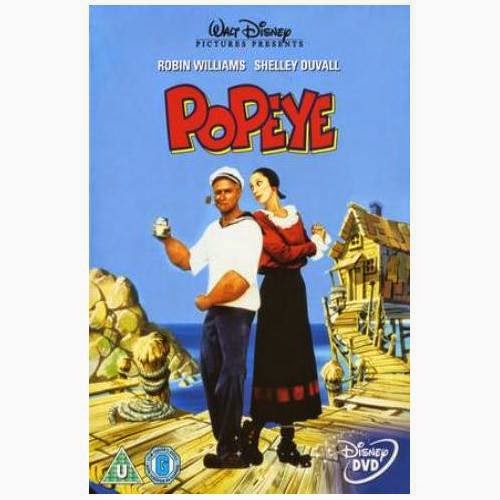 Based On
Characters By E.C. Segar

The sailor man with the spinach can!

The legendary, beloved anvil-armed sailor of the seven seas comes magically to life in this delightful musical, starring Robin Williams as Popeye, who meets all challenges with the unshakable philosophy, 'i yam what I yam and that's all that I yam'. Shelley Duvall is Popeye's devoted long-limbed sweetie, Olive Oil, one of the familiar and loveable characters who joins Popeye in his adventures in the harbour town of Sweethaven. Meet Wimpy and Bluto and all the other cartoon favourites in this happy, tuneful fun-for-the-whole-family movie!


Before I sat down to this one I figured I would try to remember just how much of this movie I could recall from the top of my head.  I mean it had been nearly 25 years since I'd seen it last but as a kid I remember absolutely loving this movie.

Well now that I've sat down to watch it again, this time with my little boy, I must admit one thing.  Time has not been brilliantly kind to this movie but at the same time, nor is it as truly bad as people say it is.  The best way to think of to describe it would be that it's just kind of there and not hugely memorable.

Out of the whole cast, it was kind of hard to remember who played who after the movie had ended.  They just seemed to all merge in to one another and that's a real shame because it was great to see that Altman had really tried to do something different with this movie and amidst all the parts that don't work, there are still some really good parts that work very well.

One of the things that I liked the most was the simple fact that some of it truly was quite bonkers.  The addition of circus workers to do their tricks and stunts in the background really gave it a bit of a weird feel in that it felt like something was off kilter and a bit strange.  I loved that about the movie.  Another thing I liked was that at it's heart, there was quite a sweet heart running through it all.

A lot of the complaints against the movie seemed to be about the simple fact that it didn't feel all that much like Popeye.  I can kind of understand that in a way because people are used to the cartoons that take a slightly more campy and fun approach to the character whereas this version has a bit of a harder and more cynical one.  That's because, I think, Altman tried to go for the original version of the character and not the more well known version that eats spinach.  While that doesn't really hit all the marks, it's still nowhere near as much of a disaster as a lot of the critics make it out to be.

All in all, I can see why this one isn't all that well known or even that loved but I for one enjoyed it.  Maybe that's thanks to my cynical and off kilter sense of humor.  I won't lie, it wasn't anywhere near as good as I remembered it being as a kid but there are much worse ways to spend a couple of hours.