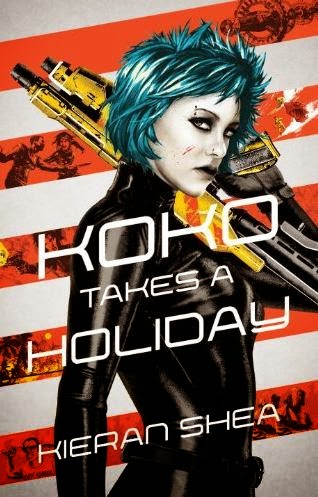 
Five hundred years from now, ex-corporate mercenary Koko Martstellar is swaggering through an easy early retirement as a brothel owner on The Sixty Islands, a manufactured tropical resort archipelago known for its sex and simulated violence.

Surrounded by slang-drooling boywhores and synthetic komodo dragons, Koko finds the most challenging part of her day might be deciding on her next drink. That is, until her old comrade Portia Delacompte sends a squad of security personnel to murder her.


I really wasn't all that sure about what to expect when this one came through my door from Titan Books.  The cover really grabs your attention and the synopsis on the book sounds absolutely wild yet it still felt like you were going in blind.

Well, I chalked this one up as a science fiction and action hybrid but it's a hell of a lot more than that.  There are influences and references galore, one of which being a bit of a Tank Girl theme running through the story at times.  Yet with all those influences, the story still comes across as having it's own unique voice and it's a voice worth listening to.

One of the things that struck me was the simple fact that it didn't feel like a novel of the prose sort at all.  In fact, it felt more like a comic book or a graphic novel.  The writing was so lyrical and descriptive that you could almost picture the panels bursting off the page with bright, bombastic art.

The characters are really over the top in places but that really adds to the excitement of the story itself and they completely fit with the whole book.  It manages to be both balls to the wall and kitsch at the same time yet utterly unique.  I couldn't wait to turn page after page to see just that Shea was going to put his characters through next.  Considering this is his debut novel, it really felt accomplished and flowed with such an easy pace that it felt like a seasoned writer that had been churning out novel after novel had written it.

Some people may be put off with some of the scenes of sex and violence peppered throughout the story but to me, they came out as feeling like a bit of a mix between a futuristic story yet  feeling like something that wouldn't be out of place in the recent grindhouse revival that is still going strong.  I loved that about Koko Takes a Holiday because of the simple fact that while it felt so different and in some places, completely random as hell, the book worked and it is definitely one that I would highly recommend.