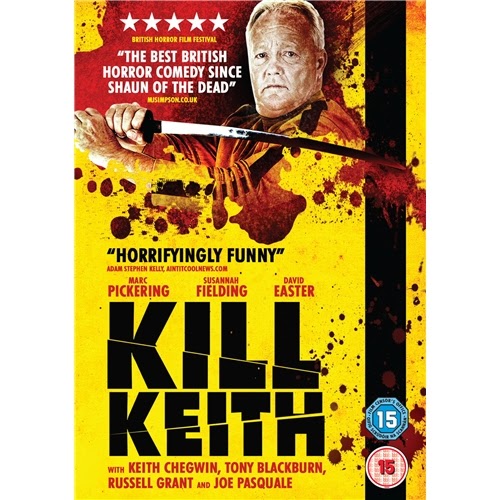 
Keith 'Cheggers' Chegwin is a household name and has been at the top of his game for nearly 40 years. He's an all round entertainer and has lived with us via our TV screens on Swap Shop as kids through to GMTV as parents.

He is undoubtedly a national treasure, and for nearly four decades has been much loved by viewers young and old. But now it's time to Kill Keith.


Let's get one thing clear from the outset shall we?  Kill Keith is a bad movie.  In places, a very bad movie.  That's part of the charm of it all though.

The team behind this movie obviously knew that they had next to no money for their budget and they really do their best with the tiny budget that they have.  For the most part they use the budget pretty well and have some inventive kills through out the movie, a couple of which had me howling with laughter.

Cast wise, the movie is peppered with famous faces from British day time television ranging from Keith Chegwin to Tony Blackburn and Joe Pasquale, the comedian.  When ever the three of these are on screen, the movie is an absolute riot of cheesy humor but while some of the jokes are quite cliched, they make it work with their enthusiasm for the movie itself.

One of the biggest surprises of the movie for me was the part of Danny played by Marc Pickering.  He really makes what might have come across as a pathetic and back bone less character in to a sympathetic and endearing bloke that you can't help but cheer on to get through the movie and win the girl, in this movie played by Susannah Fielding.

I loved the fact the movie was part soppy romance and part horror / comedy and it works really well.  The romantic parts of the movie are so sweet and adorable that you can sometimes forget the fact that there are murders going on around them.

Because of the budget of the movie making, the picture can sometimes be a little grainy in places but it's not distracting but actually adds to the grimy feel of the movie itself so that kind of works in it's favor.  It's the same with the sound as well.

This was apparently the directors debut movie but it doesn't really show.  He knows he has no budget at all and he knows that he has a cast full of people that are going to have fun doing utterly bonkers and they run like the wind with it.  While the twist is pretty much telegraphed from the beginning but that is another thing that makes the movie so much fun so I'll be rating it as fun because let's be honest, this isn't a good movie.  It's one of those 'so bad it's fun' movies and all the better for it.

Posted by Pat Scattergood at 14:32