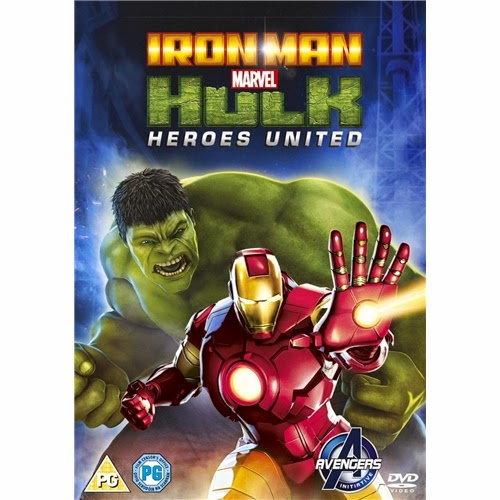 
Marvel makes cinematic history again with the most unexpected team-up in the universe! Joining forces for the first time ever, Hulk's brute strength and Tony Stark's high-tech brainpower come together to face off against the ultimate enemy.

When "Zzzax," a seemingly invincible, energy-devouring monster, threatens to destroy the planet, Marvel's unlikeliest pairing of Avengers is mankind's only hope. Alone, neither can defeat the awesome power of Zzzax. As a duo, they just might have a chance - if they can find a way to work together without smashing heads before time runs out!

Packed with explosive action and presented in groundbreaking Marvel CG Animation, Marvel's Iron Man & Hulk: Heroes United is a must-own movie event that will blow you away!


I have to admit, I've been a massive Iron Man and Incredible Hulk fan since I was a kid so when I saw this one, I knew I had to grab it and watch it.  In fact, I felt like a little kid.

Well, before I watched it I was wondering just what kind of portrayal we were going to get this time.  I was hoping for some knock down, drag out fights and some great interplay between the characters like we got in the live action Avengers Assemble movie.

We most definitely didn't get that at all.  What we got instead was a pair of bumbling Laurel and Hardy style heroes with some really awful attempts at humor and bickering.

That's not the only thing wrong with this one either.  The thing that really struck me was the simple fact that the animation looks incredibly dated, blurry and even unwatchable in places.  Considering the fact that they dropped loads of hints for a sequel during the movie, I'm thinking that they thought this one was going to rock the fans so much that they would want a lot more.  Well, this fan most definitely doesn't.  There were so many scenes that were blurry and even seemed unfinished in places that not only did it distract me from the story, what there is of it anyway, it also made me feel like it was pretty unwatchable.

Some of that has to definitely be laid at the feet of the writers.  I'm not the sort of fan that complains when their favorite characters are changed or anything like as long as it's done well.  Instead we have a very articulate Hulk bickering with a Tony Stark / Iron Man who seems to have taken some loopy pills at some point because he talks and acts like he doesn't know where he is or what the heck is going on.  The story itself doesn't really get going at all.  You don't feel like the pair are in danger at any point and there are times when the scenes go on for so long that you just feel like they padded them out in order to make the movie a little bit longer.

Talking of dialogue and the like, the cast is pretty bad for this one.  They all seemed rather bored by comparison to other Marvel and DC animated movies that I've seen and seemed even more lifeless than the awful Technovore movie that had Iron Man in.  Can anyone say pay cheque?

All in all, this one is most definitely not worth the time watching.  I'm not the biggest DC fan in the world but their animated movies most definitely are wiping the floor with the Marvel ones not only in the writing but in the animation stakes too.  This one felt like they'd found an old computer program and decided to crack a movie out in their lunch break.

This one is one to go on the give it a miss pile for sure.