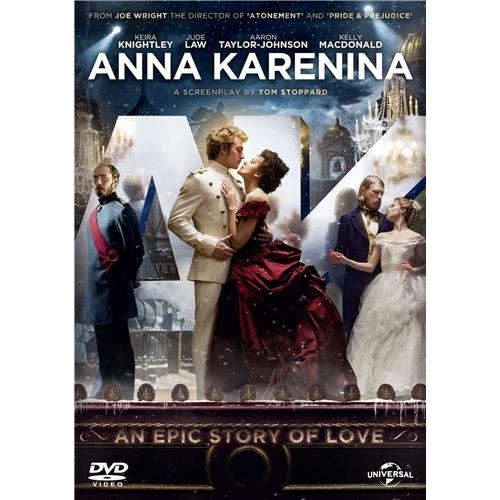 Based On
Anna Karenina by Leo Tolstoy

The timeless story powerfully explores the capacity for love that surges through the human heart, while illuminating the lavish society that was imperial Russia. The time is 1874. Vibrant and beautiful, Anna Karenina (Ms. Knightley) has what any of her contemporaries would aspire to; she is the wife of Karenin (Jude Law), a high-ranking government official to whom she has borne a son, and her social standing in St. Petersburg could scarcely be higher.

She journeys to Moscow after a letter from her philandering brother Oblonsky (Matthew Macfadyen) arrives, asking for Anna to come and help save his marriage to Dolly (Kelly Macdonald). En route, Anna makes the acquaintance of Countess Vronsky (Olivia Williams), who is then met at the train station by her son, the dashing cavalry officer Vronsky (Aaron Taylor-Johnson). When Anna is introduced to Vronsky, there is a mutual spark of instant attraction that cannot - and will not - be ignored.


As a very big Joe Wright fan, especially of the achingly beautiful Atonement, I was very eager to finally get a chance to see this one.

The original novel by the legendary Leo Tolstoy is one of my favorite books of all time so I was very excited to see just what one of my favorite directors would be able to do with the source material.  Well, I got something that I really wasn't expecting.

The staging of the movie was done in an incredibly brave and strangely beautiful way.  By staging it as if it's a stage play instead of a movie, it gave the story another layer on top of an already interesting and heart breaking story.  The idea of the rich 'upper crust' life being little more than a stage show and the lives of the not so rich being the only ones to be filmed outside of the stage was an interesting take on the novel itself.  I'll admit that it didn't fully work for me, leaving me a little confused in places, but I applaud the movie makers for taking such a brave and drastic chance with a story that has been filmed in so many different ways and by so many different people that I wasn't sure how they could put a new spin on it.

It's the performances for me that really raised the movies quality.  While the staging was good, although a little confusing at times, the performances were absolutely riveting in places.  I'm not the biggest Keira Knightley fan in the world but she was absolutely brilliant as the tragic but sometimes selfish Anna.  The biggest surprise for me was Aaron Taylor-Johnson, from Kick-Ass 1 and 2, who I really didn't see as a romantic leading man at all but he did a fantastic job and more than held his own alongside an extremely strong cast.  I would also be remiss if I didn't mention the sterling job that Jude Law did at crafting both an angry yet sympathetic version of Karenin.

That said, the best performance by far of the movie definitely goes to Domhnall Glesson, from About Time, who absolutely owned the screen when ever he was in a scene.  His portrayal of Levin was heart breaking in places and uplifting in others, ending up being the highlight of the movie for me.

The sets and the costumes in this version of the famous story are some of the most beautiful I have seen in a movie for a very long time and really impressed me with their sheer eye for detail.  So kudos to the team on that front.

I was a little disappointed with the lack of special features on the DVD because I would have loved to have seen some behind the scenes bits and pieces or even a small featurette on the making of the sets or costumes would have been great but maybe they saved that for a special edition or a Blu-ray perhaps.

All in all, while this wasn't a 100% successful adaptation of the classic Tolstoy novel and I can see why it divided critics, it is still a movie well worth taking a chance on thanks to the extremely brave staging and the utterly superb cast.

Posted by Pat Scattergood at 03:20