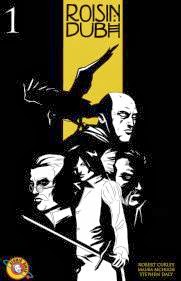 
It’s 1899, and the cusp of a new century in Ireland. 18-year-old Róisín Sheridan harbours ambitions to become a rival of the magnificent English actress Ellen Terry, if she can persuade her father that a career on the stage is ladylike.

Her plans are destroyed one horrific evening when she and her parents are viciously attacked by Abhartach: a neamh-mairbh who has been released after 1,400 years in the ground.

To survive and seek revenge Róisín must take up a new calling, one determined by ancient Gods whose agendas are not clear, and which will place her entire existence in jeopardy.


I've been reading a lot of zombie, horror and supernatural books and comics since I started this review blog.  Some have been good and some have been, well, not so good.

When I was given this one to read, I have to admit, I hadn't heard of the title itself or of the publisher that had released it.  After reading this one, I'll definitely be checking them out a lot more.

What we have here is a great mix of horror, of the supernatural and a story that weaves a lot of Celtic sensibility through out.

On paper, a woman becoming someone that will hunt a zombie like villain may sound like a plot device that has been to death and in other hands, it probably would come across as cliched and maybe even a bit boring.  That's most definitely not the case here.  The fact that they have mixed the supernatural with the Celtic makes this a really unique story, especially with the utterly superb pacing of the story itself.

Character wise, you don't get to see  too much of their motivations in this issue but that works.  You're shown just enough to actually want to get your hands on issue 2 to see more of them.  The main character herself is a superb vision of a woman that seems a little bit like she's out of her own time.  She's a forward thinking woman with a mind of her own and not afraid to voice it in a world that still seemed to want women to be seen and not heard so to speak.  I loved that about the character and that she didn't jump straight back in to gaining revenge for the murder of her family.  She was grieving, struggling to come to terms with it all.  That made the character a lot more grounded.

The idea of her soul meeting other people that would help her become the hero of the title was really well done and that's where the brilliant art came in to play.

Talking of art, 'Roisin Dubh' is one of those stark, moody black and white comics that seem to be going the rounds at the moment.  However, this one doesn't get lost in the shuffle.  The art here really works and brings the story to the forefront for the reader.  It's the panel work that shines the most for me as there are a couple of pages that really put forward the feeling of dread and horror that runs through the title.

All in all, this is an utterly superb comic book that really deserves to be read by more people.  The story is exciting, it has a great ending that makes you want to get the second issue as soon as you can and the art is absolutely stunning.  What more could you want?