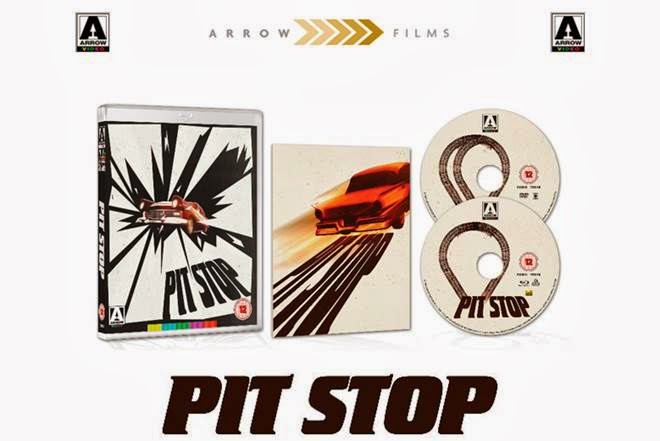 The most dangerous game ever devised, to pit man against man, flesh against steel – the figure-8 race! Jack Hill (Coffy, Foxy Brown) follows up Spider Baby, once again teaming up with Sid Haig (House of 1000 Corpses) in one of his greatest roles for this action-spectacular crash-o-rama!

Richard Davalos (East of Eden) stars as Rick Bowman, a street punk who winds up in jail after a street race goes wrong. Bailed out by race promoter Grant Willard, Davalos is put in the deadly track where he comes up against Haig’s maniacal winner Hawk Sidney. Featuring an outstanding supporting cast including Brian Donlevy (The Quatermass Xperiment) in his last film appearance, Ellen Burstyn (The Exorcist), billed as Ellen McRae, and Beverly Washburn (Spider Baby), Pit Stop is one of Hill’s lesser known films but arguably his greatest.

Filmed on a real figure-8 track, Hill and his crew were able to capture gripping real-life car wreck scenes lending the film a brilliant sense of realism. You’ve never seen a motion picture like this before – can you take it?


Sadly, and I'm not sure why, 'Pit Stop' is one of the great Jack Hill's lesser known movies.  That's always puzzled me in a way because of the fact that it is by far his greatest movie.  When you consider the movies that he has made in his career, that's no mean feat.

The story of the movie itself is a simple one.  It's a tale of a man entering in to the world of racing, in this instance on a figure 8 track, and going up against the hot shot guy who always wins.  That may sound stereotypical and on one hand that is but it's the way that Hill both shot and directed the movie that makes this not only his best movie but also one of the best movies of the 60's.

The first thing that grabbed me while watching 'Pit Stop' is the filmography.  Shot in black and white, the movie looks incredibly atmospheric and even has a sense of dread running through it, especially during the utterly gripping race scenes themselves.

However, it's the cast that really make this movie so memorable for me, especially in the shape of the always brilliant Sid Haig, who gives a brilliantly bonkers and fantastic performance as Hawk.  He really does ooze the cocky nature of  the character yet you see the character exhibit many different layers that you see that he is far from a one trick pony.  If I was to tell you anymore of the characters then it might turn the review little too far in to the spoiler side of things and we all know that I hate that but keep an eye out for Ellen Burstyn, then named Ellen McRae, who really gives the movie an emotional edge.

Once again, Arrow Films have put some great special features here that really do a fantastic job of revealing the behind the scenes story of the making of the movie.  My personal favorite of these was the interview with Jack Hill, who really came across as someone who is more than happy to sit and talk to the fans about his movies.  It was the same with the Sid Haig interview too.

Definitely well worth picking up.