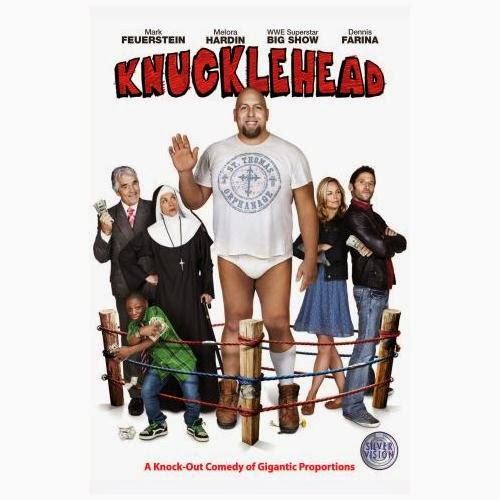 
Knucklehead is a knock-out comedy in the vein of Blades of Glory, Happy Gilmore or Dodgeball.

During their journey, Walter discovers what life is like outside the orphanage while Eddie becomes morally conflicted over whether to take all the loot for himself or keep his promise to Walter, the one person he can actually call a friend.


WWE Studios has a bit of a hit and miss track record with it's movies.  One moment the movies are very well made and other times, they can come across as a 'The Asylum' movie but with a better budget so where would this one fall?

Well, while it wasn't terrible, I would go out of my way to say that it was fantastic either.

The one thing that bugged me a fair bit about the movie was that it came across as a remake of the already forgotten Jack Black movie 'Nacho Libre'.  That hurts the movie a fair bit because it's another thing to put in to the pile of moments that really show the lack of originality that this movie has.

The story itself isn't terrible.  Far from it.  It has some nice, heartwarming moments and even some really tear inducing funny moments too.  It's just the lack of originality that hurts it.  There were quite a few movies where if you have seen movies like 'Nacho Libre', 'Dodgeball' or other such movies then you would have pretty much seen them before.

However, the thing that raises this movie above just being a 'stick it on when there's nothing else to watch' type of comedy are the performances.  Mark Feuerstein does a good job of making a rather cliched character interesting and really bounces off the Paul Wight really well.  It kind of reminded me a little bit of the relationships in the movie 'Kingpin'.

Another character that made me laugh was that of Sister Francesca played by Wendie Malick.  Once again, while not original, Malick really put her all  in to making her memorable but it's not her that made this movie really worth watching.

Surprisingly, it's Paul Wight, better known to wrestling fans the world over as The Big Show', that steals the show.  I would actually really like to see more movies with him in after seeing him here.  He really makes the character interesting, sympathetic and loveable without being overly silly.  There were lots of moments where he could make me really want to root for him with just a facial expression or a well placed word or mannerism.

One thing bugged me a little about the movie however.  The first part of the movie was spent showing the relationship between Walter Krunk, played by Paul Wight and that of a boy named Henry, played by Kurt Doss.  I wanted to see a bit more of that, especially near the end, yet they put a full stop on the relationship with a comment that should have been a big deal but felt tacked on at the end.  It almost felt like they ran out of time and realised they needed something there so just stuck the sentence on the end just before the credits.

The special features are pretty much the same as the movie.  They're not terrible but they're also not the sort of special features that you would come back to again and again.  The bloopers were funny and made it look like the movie was a lot of fun to make though.

All in all, this isn't terrible by any means but it had the chance to be a lot better than it ended up being.  With a slightly better, more original script and characters then this would have been brilliant, especially with the utterly superb performance from Paul Wight.  Instead it's one of those movies that is enjoyable but not ultimately memorable.

Posted by Pat Scattergood at 03:26